watch 03:19
Wiki Targeted (Games)
Do you like this video?
Play Sound

The AX400 is an android model created by CyberLife in Detroit: Become Human.

The AX400 is a CyberLife android model released in 2032. Its function was as a domestic worker, housekeeper, and caretaker of young children.[1]

It can speak 300 languages and prepare more than 9,000 dishes. It is popular for its ability to get along well with children and can care for them, entertain them, and help them with homework.[1] It has 9,000 children's stories stored in memory.[2]

The known common appearances of the AX400 are an adult white woman and an adult black woman. It can change its hair color between white, blond, brown, and black. It wears an android uniform consisting of a white and black short-sleeved tunic dress and white pants, referencing the French housemaid dress.

See also the galleries of individual androids of the model, such as Kara#Gallery. 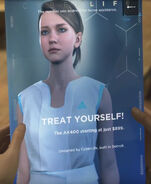 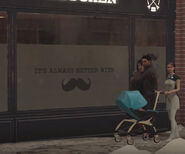 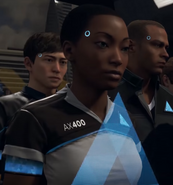 A black AX400 hugs a little girl in the park in "Shades of Color".

An AX400 (Kara) with its skin deactivated.
Add a photo to this gallery

Retrieved from "https://detroit-become-human.fandom.com/wiki/AX400?oldid=40644"
Community content is available under CC-BY-SA unless otherwise noted.