"Midnight Train" to "Battle for Detroit"

Adam Chapman is a human in Detroit: Become Human. He lives with his mother Rose Chapman on Rose's Farm outside Detroit.

He is afraid that the police will come for his mother, due to her helping deviant androids escape the country and wonders why his mother wants to help the androids.

Adam is seen working outside the house and is the first person to greet Kara, Alice, and Luther when they arrive at the farm seeking refuge. After Rose invites the trio into her home, Adam gets into an argument with his mother over sheltering androids, fearing they will likely get arrested.

Subsequently, while Rose is out, a police officer comes knocking at the door. Adam's nervousness may raise the officer's suspicion if Kara doesn't dismiss his behavior as exhaustion.

If Kara did not steal the bus tickets from the couple, Adam will call them over and tell them to get in his mother's car. They will arrive at the river that runs through Canada and his mother will come to pay the smuggler the money for the boats. Adam will say goodbye to Kara and will leave with his mother.

If Kara, Alice, and Luther (if he was saved in Crossroads and Battle for Detroit) make it to the Canada Border Inspection Station, and Kara talks to Rose in the restroom, she meets Adam outside.

If Markus had led a peaceful revolution, Adam agrees that androids are alive and deserve to be free after seeing Markus' Demonstration.

Even if Markus hadn't been peaceful, he would still come to agree that androids are alive despite admitting he doesn't agree with what Markus is doing.

However, If Luther kills Police Officer 0617 in Midnight Train, he will be hostile towards Kara and accuse her that she "killed a man" and they "Don't deserve to live" before walking off in anguish.

Concept art of Adam and Rose. 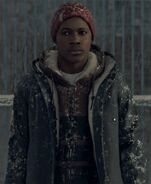