Androids! We review the latest model inside

NASA announced the launch of a five android crew to explore Io, one of Jupiter's satellites. The journey will last three years and is expected to teach us much about the formation of our solar system.

Though not the first androids in space, this is the first all-machine crew, proving that androids are sufficiently reliable to be entrusted with the entire mission.

"Androids are an extraordinary asset for the conquest of space," said Michael Shelley, director of NASA. "Cosmic radiation destroys human DNA. Humans suffer many effects from long term space travel, while androids are immune to most of these issues."

NASA confirmed that no return journey was planned and that the androids would work on Io for several months before being destroyed by the extreme conditions of the planet. 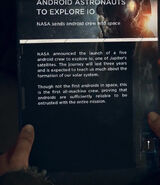 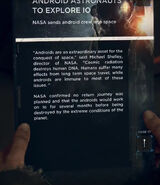 This magazine is located in the Jericho chapter, on a bench right after Markus gets off the train.

Retrieved from "https://detroit-become-human.fandom.com/wiki/Android_Astronauts_to_Explore_Io?oldid=38063"
Community content is available under CC-BY-SA unless otherwise noted.