Should it be outlawed?

In its third game of the season, android pitcher X67 threw a pitch that broke the 120mph mark.

The human batsman wasn't able to swing until after the ball reached the catcher's glove.

Androids were introduced as a one-per-team innovation but they've come to dominate team strategy. Every draft sees the major professional baseball teams breaking their own transfer records to purchase these latest android models, but is the game suffering?

Jenny Waterfield, head of fanzine "Home Run", says fans are becoming disenchanted: "The magic of sport is seeing the limits of human potential. A machine breaking these kinds of records just isn't exciting - or even surprising".

But not everybody agrees. Christopher Lennox, a baseball pundit and ex-pitcher, thinks androids are making games more exciting: "These machines are shaking things up, and pushing players to do even better. The game can only survive by evolving." 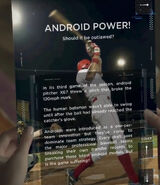 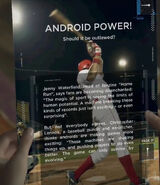 This magazine is located in the A New Home chapter on the living room table.

Retrieved from "https://detroit-become-human.fandom.com/wiki/Android_Power!?oldid=29083"
Community content is available under CC-BY-SA unless otherwise noted.