Bathtub android is an android in Detroit: Become Human.

He is one of Zlatko's experiments and Zlatko has left him in the bathroom upstairs in a bathtub. It seems that he has been programmed to be extremely loyal to him.

In the "Zlatko" short film, the android lays in the bathtub in Zlatko Andronikov's House and is heard singing "Rock-a-bye Baby".[1]

When Kara enters the bathroom in search of Alice, the android will begin to loudly question her. He will continue to ramble on about how Kara shouldn’t be there without permission until she either leaves the room or approaches and touches his exposed thirium pump. He will fearfully question her, “What are you doing? You’re not gonna hurt me? No, no, no, you wouldn’t do that...” Kara then has 4 choices. She can ask if he has seen Alice, to which he will deny, she can make a deal with him to remain quiet if she lets go, which he will agree to, and she can shut him down or let go of his heart. If Kara pulls his heart out he will instantly go quiet and shut down. If Kara spares him and enters the bathroom again with Alice while trying to escape, the bathtub android will break his promise and tell Kara he can't let her disobey the master, before shouting for Zlatko. Kara can shut him down here and if she is quick enough, Zlatko will not be notified.[2]

The bathtub android appears as an Asian male. He has no limbs and his chest cavity is torn open, exposing his biocomponents (most prominently his thirium pump). Many of his wires have been ripped out of his body and seem to be haphazardly reconnected.

The bathtub android at first, appears to be very obedient to his master due to the abuse and torture he had suffered from like various other victims. However, if Kara attempts to euthanize him, he becomes fearful for his life, showing signs of being a deviant. Despite this, he is still loyal to Zlatko and will break any promises of silence either out of fear of losing his life at his tormentor’s hands or due to Zlatko's experimentation to prevent him from becoming fully deviant. 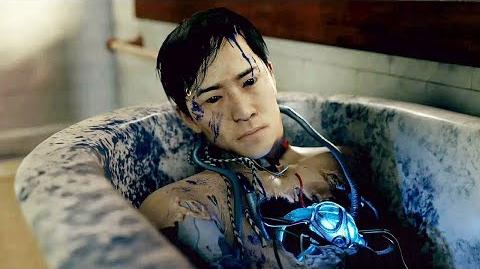 Retrieved from "https://detroit-become-human.fandom.com/wiki/Bathtub_android?oldid=37177"
Community content is available under CC-BY-SA unless otherwise noted.