The quantum magnet that could scrub carbon from the air

How CyberLife created a technological revolution

Space tourism: is Mars your next holiday destination?

After decades of android designs that were primitive, robotic, and expensive, CyberLife revolutionized the industry through an innovation of their CEO and visionary Elijah Kamski.

Thirium 310 (the chemical name of blue blood, which is a trademark) is a compound vital to the functioning of all CyberLife androids, circulating energy and electrical information throughout the machine's 'body'.

This fluid powers 'bio-components' [sic], synthetic organs that roughly reflect the organ system of humans. Some of these organs serve important functions (maintain temperature, circulating blue blood, and so on) where others are used to make the androids seem more human (lungs to simulate breathing). As with humans, the loss of blue blood will impair an android's functions, ultimately resulting in shutdown.

Blue blood is essential for CyberLife's android' key selling point: how human they seem. That this wonder chemical (both a power supply and a way of regulating the androids' internal systems) was developed by one man - who isn't even a trained chemist - only furthers the myth of Elijah Kamski. 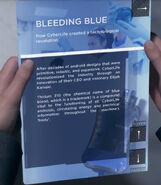 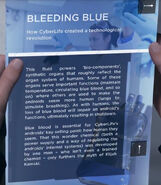 This magazine is found in the Public Enemy chapter, in the kitchen of the broadcast room.

Retrieved from "https://detroit-become-human.fandom.com/wiki/Bleeding_Blue?oldid=28687"
Community content is available under CC-BY-SA unless otherwise noted.