The caretaker is an android in Detroit: Become Human who replaces Markus as Carl's carer if he survives the chapter "Broken". He resides in Carl's house. He is not officially named and his uniform does not display his model number.

The caretaker was bought to serve Carl Manfred if he survived "Broken" as Markus was destroyed due to assaulting Leo Manfred, his son.

Although it is not mentioned, it is possible Elijah Kamski gifted this android to Carl, like he gifted Markus to him when Carl lost the use of his legs.

The caretaker is inside Carl's bedroom when Markus comes up the stairs. Surprised by an unexpected arrival, he exits the room and asks Markus to leave as Carl is not seeing anyone. Determined to see Carl, Markus approaches the caretaker and converts him by touching his arm. The caretaker softens his attitude and steps aside, but not before warning Markus that Carl is very weak and may not be able to talk to him.

If Markus causes Carl to die by shouting and overwhelming him, the caretaker will run back into the room and confirm Carl's death.

The caretaker appears as an adult white male with brown hair and green eyes. He wears a standard all white android uniform.

Prior to conversion, the caretaker is obedient like any other non-deviant. After conversion however, he remains so. He is one of the only androids in the game that does not want to leave his owner/previous role. He shows no physical reaction during and or after being woken, but once Markus pleads with him he softens and allows him to see Carl. He still shows concern for Carl while deviant and as such is very likely to continue his service to him. 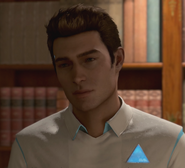 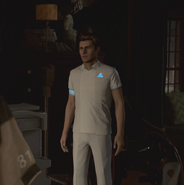 The caretaker runs into Carl's room after his death.