Carl Manfred is a human in Detroit: Become Human. He is a celebrated painter and owner of the RK200 android Markus.

He is a paraplegic and seems to have other unnamed medical conditions, so Markus acts as his nurse and assistant. Carl treats Markus as if he were a son, teaching him to paint, exposing him to literature and music; developing his spirit a little each day.

Carl is an artist and painter. He became the leading figurehead of the "Neo-Symbolist movement" in the 2020s.[1] After a years-long proliferate period, Carl fell into a dark period marred by alcohol and drugs (possibly after the accident, see below). As far as the public knows, Carl apparently had returned to work some months before November 2038.[3]

Carl has a son named Leo, born in 2010 from a short affair with an unnamed fan. Carl acknowledged Leo as his son and paid child support, but never met Leo until he was a teenager.[1] They have a strained relationship, Leo believing Carl never wanted him and thus never loved him. Leo is also addicted to Red Ice and is always in and out of sobriety, which also puts a strain on their relationship.

At some point Carl was in a severe accident, losing the use of his legs and becoming a paraplegic. For several years afterwards, Carl became reclusive and depressed. His friend Elijah Kamski, founder of CyberLife, gifted him an RK200 prototype android, Markus, as a caretaker and companion for the aged and disabled Carl. Unconditionally devoted to Carl, Markus heeds his advice on studying literature and music, and listens to his philosophies about the world and humanity. Under Markus' care, Carl recovered his motivation for life and painting, and they cultivated a father-son relationship.

Although Markus resulted in a great improvement in Carl's quality of life and happiness, Carl's relationship with Leo became further strained. Leo was jealous of Markus and his relationship with Carl, believing Carl treated Markus better than him. He brings up more than once that Carl must love Markus more than him because Markus is "perfect".

He is seen resting in his bed. Markus comes inside to greet him and tells him it is time to wake up. If Markus was assaulted by the protesters on the way home Carl will remark on his disheveled appearance, asking if he is okay and calling the protesters idiots. Markus runs through a daily routine, including helping Carl use the washroom, dress, and eat breakfast. After helping him out he tells Markus to find something to do. Markus can pass the time by playing chess, reading a book or playing the piano and Carl makes a comment on what Markus is doing and tells Markus that someday he will not be able to take care of Markus. Markus then accompanies Carl to his studio where he helps him paint. After a while, Carl will ask Markus to paint something, which Markus initially has trouble with claiming he is not programmed to paint, but Carl will push and insist that Markus look within himself and paint something based on his feelings. After Markus finishes painting, Leo will come in and ask for money. Carl can clearly tell that Leo is on drugs, accuses him of such, and then asks him what happened to the money he already gave him. Leo will say he does not know, and Carl refuses to give him any more money. Leo will get upset and redirect his anger at Markus, accusing Carl of loving Markus and his paintings more than him. Leo pushes Markus and Carl gets upset and yells for him to stop. Leo accuses his father of never having loved him, and storms out.[5]

Carl and Markus return from a party at the Museum of Modern Art later that night. Carl notices that a light is on in the studio is on and tells Markus to call the police. Markus can bring Carl along to investigate and only to discover that Leo has broken into Carl's studio to steal artwork. Leo plans on selling the artwork for money and he claims that it is part of his inheritance money. Carl gets angry and tells Markus to "make Leo leave". Leo will get upset and start hitting Markus, and Carl will tell Markus not to defend himself. If Markus follows Carl's order and endures the assault, Carl will have a heart attack as he falls off his wheelchair when Markus runs to him. Before dying, he comforts Markus telling him "Don't let anybody tell you who you are". Leo will lie to the arriving police officers and say Markus killed Carl and police officers shoot Markus. If Markus fights back, he will knock Leo unconscious. Carl will be shocked and crawl over to Leo, visibly upset with tears that his son is hurt, and warns Markus that the police will believe that he is the aggressor and will destroy him, and yells at him to run away. However, it was too late when the police arrived. The police officers will see Markus near Carl and an unconscious Leo before shooting him.

If Carl dies, an auction of a collection of his paintings in the following weeks is announced.[3]

If Carl survives, he is found in his room lying on a hospital bed at his home. Carl's condition has deteriorated considerably after Markus left. Markus arrives at his house where an android caretaker tells him he does not want any visitors and his condition is poor, but Markus can convert the android and he pleads the android to let him see Carl. When Markus enters, Carl will be happy to see him. Markus can talk to him about his life since leaving and his worries and can ask for advice. If Markus' remarks are aggressive and violent in nature, Carl will say he is not the Markus he once knew. If Markus persists in this behavior, then Carl will die of a heart attack. If the conversation is not violent, Carl will tell him that he is like a son to him and that Markus has courage. He will then will go back to sleep and Markus leaves. [2]

If Carl died, Markus will visit his grave to talk to him and ask him for advice.[2] When he leaves, he crosses paths with Leo, who appears to be visiting the grave as well. The two do not interact.

Carl has grey hair, blue eyes, and several moles which most notably appear on the side of his forehead. He also has tattoos that cover both of his arms; the left has a geometric design while the right arm seems to be more detailed.

In "The Painter," he is seen to be wearing a black shirt with blue pants. After he finishes his shower, he wears a dark blue cardigan with beige pants and a snake-like patterned scarf.

After his party at the Museum of Modern Art, he wore a brown coat with a dark red tux jacket and a detailed scarf. He also wears dark denim pants with black shoes.

Carl can be sarcastic, often having quick-witted and playful responses for Markus. Despite his good humor, Carl can also be quite somber and reflective, often bringing up his own old age, poor health, and impending death in a matter-of-fact way, once referring to himself as "just an old man clinging to his brushes". He can be a tad misanthropic at times. He expresses having little interest in seeing other people or attending social gatherings, and seems exhausted by said obligations. He also seems to have very little faith in humanity's morality and future.

Despite his sometimes dour mood, Carl can also be very sentimental and caring. He is one of the first and few human characters in the game to treat androids with respect and kindness, showing concern for Markus when he shows signs of having been assaulted. He is also responsible for encouraging Markus' free thought, telling him to look inside himself and his feelings in order to paint something, which insinuates he believes Markus was already capable of free thought and feeling emotions despite being an android. Carl chose to let Marcus wear human clothes in the house. In many ways Carl is greatly responsible for the android revolution and a great portion of the game's events, having raised Markus to believe in his own autonomy. In 'Broken', if Carl dies, his last words are for Markus, saying "don't let anyone tell you who you are". Likewise, even though he can be stern with Leo and is frustrated by his addictions and unruly behavior, he also clearly loves him deeply. In 'The Painter', after Markus wakes him up, he asks if Leo has called him yet and seems troubled when Markus tells him no. In 'Broken', if Markus pushes Leo and knocks him unconscious, Carl will crawl from his wheelchair to Leo, begin crying, and refer to Leo as his "little boy". 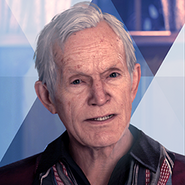 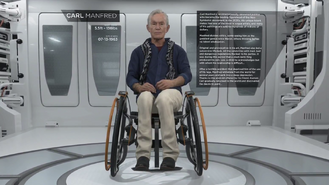 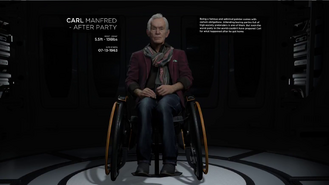 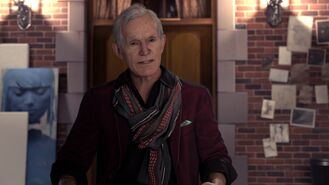 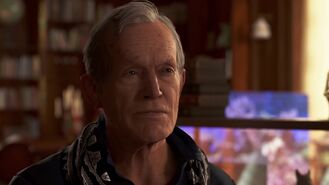 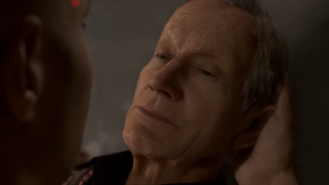 Carl comforts Markus, before dying of a heart attack. 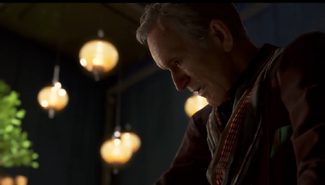 Carl is upset when Leo is hurt, after being pushed by Markus. 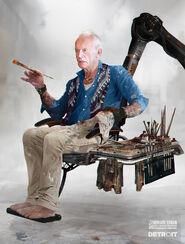 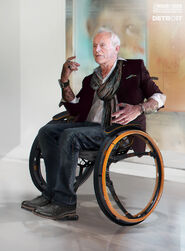 Concept art by Mikael Leger.
Add a photo to this gallery

Retrieved from "https://detroit-become-human.fandom.com/wiki/Carl_Manfred?oldid=36806"
Community content is available under CC-BY-SA unless otherwise noted.