The HK400 was bought secondhand by Carlos Ortiz in 2036.[1] Carlos never named the android as he did not see him as a person.[2]

The android was abused by Carlos Ortiz, beating him with a bat and sometimes burning him with cigarettes. He eventually gained human emotions and got tired of the abuse.[3]

In October 2038, Carlos Ortiz got high on drugs which caused him to become violent and beat the android with a bat. Out of fear, the android decided to defend himself with a kitchen knife. He was then overcome with rage from the abuse he had suffered and stabbed Carlos 28 times.[4] He then carved a statuette as an offering to rA9 and, not knowing what to do due to the lack of orders being given to him, hid in the attic for over two weeks.[3]

If Connor finds the android, he pleads with him to let him go. Regardless, Connor tells Hank Anderson that he has found the android.[4]

Later, Hank fails to get a confession out of him, as he is uncooperative in confessing to the crime. Gavin believes that beating the android will get him to talk. Connor tells Gavin that it would only damage the android and he would still not talk. Connor offers to interrogate the deviant android. During the interrogation, Connor can attempt to convince him to talk, pressure him into confessing, or probe his memory; alternatively, Connor can also give up and end the interrogation without getting the confession.

If he does not smash his head into the table, the cops will come in after the interrogation to take him to his cell. The android's stress level will keep spiking as Miller continues to try and get him to stand from the chair.

If he survives, he can be found in his cell the next day. The player will be given the option to ask him questions, but the HK400 will not answer. Distraught by the knowledge of his impending deactivation and disassembly, he will kill himself by repeatedly smashing his head against the cell window.[6]

This HK400's body and statuette may appear in the DPD Central Station's evidence room when Connor is reviewing the deviant cases' evidence to find Jericho.[5]

This list shows the victims Carlos' Android has killed: 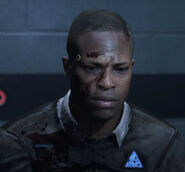