This article is about the android models. For other meanings, see Chloe (disambiguation).

The "Chloe" is a group of android models created by CyberLife, among them the RT600 and ST200.

The Chloe models are personal assistance models; there have been various iterations that were optimized new models[1]. It is designed to help humans with everyday tasks such as doing housework, cooking, and managing appointments.[2]

The ST200 can speak several languages and perform most tasks a human could accomplish.[3]

The known appearance of the Chloe is as a pale-skinned white woman, with blue eyes and long blonde hair, worn in a low ponytail. It acts sociable and charming.[1]

The Chloe was a huge success commercially and laid the foundation for the company's rise and empire. Despite the availability of newer, more sophisticated models, the Chloe remains popular and widespread.[1] 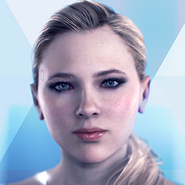 concept art
Add a photo to this gallery

Retrieved from "https://detroit-become-human.fandom.com/wiki/Chloe_(android_model)?oldid=36100"
Community content is available under CC-BY-SA unless otherwise noted.