Officer Chris Miller is a human in Detroit: Become Human. He is a member of the Detroit City Police Department.

Chris Miller is a young police officer from Detroit fresh from the academy. He is rigorous, dedicated and has a great professional and personal respect for Lieutenant Hank Anderson.

He is first seen holding a tablet outside Carlos Ortiz's house and Hank greets him in the background. He will patrol the grounds outside. If the deviant is found Hank Anderson will call out his name to get inside the house when Connor alerts him to the deviant HK400.

He is seen in the observation interrogation room. After, the interrogation is completed. Chris will walk into the interrogation room and will unlock the table cuffs and will attempt to drag the HK400 to the holding cell. The HK400 will put up a fight and steal the gun if pressured to shoot itself or sometimes shoot Connor in other choices. If Connor intervenes when he was friendly to the HK400 and was not too pressured by Connor, he will tell Chris to stop touching it and assures Chris that the HK400 will follow him quietly to the holding cell.

In addition if the HK400 android survived he will say "You were right about that android...it's been quiet in the cell all night." If Connor walks to the holding cell the HK400 is in (If it did not destroy itself in the interrogation) he asks more questions. After the conversation, the HK400 will damage its head, and stop functioning. Chris and Detective Ben Collins will rush over to find the HK400 not working. Ben tells him to clean up the blue blood mess. Later, when Connor and Hank get into an argument (with Hank threating Connor telling that he is pissing him off) and he will interrupt Hank and tell him that he has some information on a deviant android that attacked or killed its owner has been sighted in the Ravendale district.

He is seen at the crime scene with Detective Gavin Reed and taking crime scene photos. After, Gavin finishes talking to Hank and Connor, he will leave with Gavin. Chris will show his respect to Hank and say good night to him.

He greets Hank and Connor. Chris is seen explaining the event what happens during the hijacked broadcast in the Stratford Tower to them. He also introduces FBI Agent Perkins to them. If Connor interrogates the JB300 androids, he will be seen talking to Hank. When Connor find the deviant and is able to fix himself he will alert everyone about the deviant, Chris will be caught off guard when he hears this and Hank will shield him while Hank is trying to get out his gun. He will not get killed by the JB300 336 445 581 in all choices.

Chris and his partner arrive on scene and gun down several androids that are fleeing the area. He and his partner are overrun by androids. They are held at gunpoint by an android, who took one of their pistols and has them on their knees. Markus has the choice of sparing them, killing them, or giving the gun to the android that held them at gunpoint, which results in the android killing Chris and his partner. While at gunpoint, Chris begs Markus to spare his and his partner's life fully in tears, terrified of being killed and feeling remorseful for what he did, if Markus did spare or killed him he will only be mentioned by a reporter on CTN TV news about being spared or them being found dead.

In "Meet Kamski", Hank mentions him after speaking with one of his colleagues over the phone when him and Connor go to Elijah Kamski's house. If Chris died, a saddened Hank will state that his body was found early that morning killed by his own service weapon. Connor will express his sympathies to Hank. If Chris survived, Connor will ask Hank if Chris is alright and Hank will tell Connor that he is in a state of shock and that Markus saved him.[2] 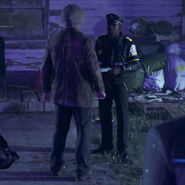 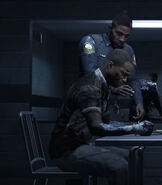 Chris trying to stop the HK400 from killing itself.

Chris at his desk in Waiting for Hank

Chris surprised that Connor is alive.

Chris surprised that Connor is still working for the police.

Ben and Chris stare at the destroyed HK400 in shock.

Chris closes the cell door and backs away from the HK400.

Chris giving Hank information about the last sighting of the runaway AX400.

Chris Miller in The Eden Club

Chris and his partner being held at gunpoint in Capitol Park.

Chris begs while held at gunpoint.