Cristina Warren was a celebrity with experience in social media and as a vlogger.

Lacking any experience in government she was propelled by her celebrity influence during the election. She was elected to her first term as President of the United States in 2036, in a very close election that divided the country.

President Warren has not been doing so well in her term in office. Her political party and cabinet are in disarray and her allies are surprised that she is still in office. According to a public survey, the approval rating of Warren is 33% in 2038.

There are accusations against her including rumors that she's too close to big businesses, particularly CyberLife, and she's under investigation to determine whether or not she has benefited from CyberLife's help in obtaining compromising information about her opponent during the presidential campaign.[1]

Warren considers the North Pole, newly discovered as an abundant source of Thirium due to retreating ice, as an undisputed property of America. She shows hostility to Russian President Artem Ivanoff, branding him as "a dangerous individual" and calls Russia's activity in the Arctic "a crime against the international community". Her action has led to intense tension between the countries and many international relations experts are saying an armed conflict is inevitable.[2]

During the uprising, Warren has sent in the U.S. Army to detain the revolution and has ordered the creation of recall centers to destroy androids in camps.

Depending on the player's choices during the game, President Warren will hold a live conference at the White House to either make peace with the androids and accept their existence as a new life form, declare war on them, or surrender to overwhelming android force and concede the new reality of a new intelligent life form. In addition, if public opinion is supportive, when Markus kisses North or sings when surrounded by U.S. Army soldiers at the barricade Warren will tell the military to stand down.[3] There is also a scene where the player acts as Warren during a press conference and can decide on which question(s) to answer. 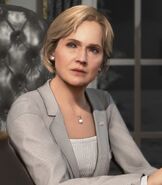 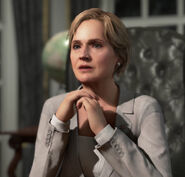