This article is about the sex club. For the chapter, see The Eden Club.

The Eden Club
The Eden Club is a sex club chain staffed by androids in Detroit: Become Human. The chain has clubs scattered all over the US.[1]

The Detroit Eden Club, located at 1177 Woodward Ave and managed by Floyd Mills[2], appears in the Chapter "The Eden Club". The club claims that it has "The sexiest androids in town".

The club offers male and female android models to be rented (e.g. HR400, WR400). The house offers rooms, but the androids can also be taken off the premises to make house calls.

Eden Club is one of the clubs with the exclusive authorization to use the WR400 "Traci" sex android. As they are not human, sexual activity with them does not violate any prostitution laws[1].

The club's hallway spaces have androids displayed in transparent booths, where they can be browsed and taken out after a purchase is made via the adjacent panel; the purchase requires fingerprint verification.

To protect the privacy of its customers, this club's policy is to reset all Tracis' memory every two hours. According to Floyd Mills, there also is not any video surveillance on the premises and no report behavior of deviancy.

Between 2-3 months before November 6, 2038, a WR400 model vanished from the club with unexplained cause, and up until November, the club was unable to find the reason behind it.

On November 6, 2038, the DPD is called to a potential murder at the Eden Club. Connor and Hank Anderson go to investigate the crime in Chapter "The Eden Club". The victim, Michael Graham, had rented two Tracis and was strangled to death by one Traci after he had fatally damaged the other one.[3]

Gavin Reed and Ben Collins are the first to arrive on scene. Hank Anderson asks Floyd Mills if he has seen any of the androids acting deviant and Floyd says he does not know. 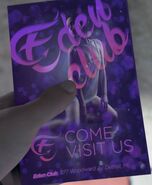