In 2038, the FBI got involved in the case of deviant androids in Detroit and the rest of the nation.

The FBI appears in the chapter "Public Enemy". The FBI is pursing Markus due to his hijacked broadcast message of inciting a rebellion and persuading androids to join their cause and/or for attacking at the Stratford Tower. The FBI has sent Agent Richard Perkins to investigate the rise of deviancy in androids. 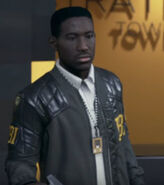 Retrieved from "https://detroit-become-human.fandom.com/wiki/Federal_Bureau_of_Investigation?oldid=25572"
Community content is available under CC-BY-SA unless otherwise noted.