"The Interrogation" to "Last Chance, Connor"

He is a detective in the Detroit City Police Department and works at the central station.

If Connor found the android in Partners, Gavin can be first seen inside the observation room with police officer Chris Miller and Connor, while Lieutenant Hank Anderson attempts to interrogate Carlos Ortiz’s android.

Hank enters the observation room after failing, and Gavin suggests that they could “Rough it up a little. After all, it’s not human”. Connor then informs him that androids do not feel pain, and that it will only be damaged, as well as potentially triggering the android to self-destruct.

Gavin gets annoyed by this and asks Connor what they should do instead. Connor suggests that he could try questioning it. Gavin laughs at his suggestion but Hank allows Connor to interrogate the android.

Gavin will be shocked by both outcomes.

When arriving at the police station, Gavin is seen talking with officer Tina Chen at a table in the break room.

If Connor dies in The Interrogation, Gavin will be shocked to see him and says "Shit... Look at that, a fucking ghost. His clone ends up in a dumpster, but this morning, what do you know!? Another son of a bitch takes his place..."

If Connor survives, Gavin will say "Fuck, look at that... Our friend the plastic detective is back in town! Congratulations on last night, very impressive." (if Connor was able to get a confession) or he will additionally say "Could've got something outta that android if you haven't fucked it up..." (if Connor was unable to get a confession or if the android self-destructed).

If Connor never found the Android in Partners, so the chapter The Interrogation never happened. Gavin's dialog will change due to him first meeting Connor. "Look at that! It seems Hank has a new partner. Fucking plastic detective! Hey! You his drinking buddy? You bring him home when he's too drunk to find his car? Ha, he stinks of booze!"

All three options will have Gavin demand Connor get him a coffee. Connor can choose to accept, refuse or ignore.

Gavin then can be seen at his desk "working", either laying back playing on his phone with his feet on his desk, or he puts it away and pretends to be busy on the computer terminal.

Gavin is seen examining the scene of a murder of a human male at an android sex club called the Eden Club with Officer Miller, who is shooting photos of the crime scene. Gavin immediately insults Hank and Connor upon seeing them, then asks what they are doing there. Connor informs him that they have been assigned to all cases involving androids. Gavin then proceeds to tell them that they are wasting their time and makes a lewd joke regarding the victim.

Hank tells him that they are still going to look around, and Gavin gets annoyed by Hank's response. He insults Hank about his drinking habits and shoulders his way past Connor and leaves.

Gavin will approach Connor at the door of the evidence room, and ask him where he’s going. Connor can choose to ignore or respond to him. If you respond to him you can choose Ironic, Low Profile or Calm.

If the player chooses ‘low profile’ or ‘calm’, Gavin will be satisfied that Connor will leave and he will rudely joke to Connor by saying "Be careful on your way back...Androids have a tendency of, huh...Getting themselves set on fire these days... " and will call Connor a prick as he leaves.

If you choose the ironic approach, Connor will tell him that he is registering evidence in his possession and tells him not to worry and that he is going to leave. Connor then tells Gavin that he will miss his “bromance”, this annoys Gavin and he pulls out his gun to intimidate him and jokingly mimics shooting Connor. He tells him to hurry up, insults him and then walks away. Additionally, if the player choose to ignore Gavin, he tries to call out to Connor, however Connor will continue to walk away.

If the player has chosen the "ironic" or the "leave" approach, after finding out where Jericho is, Gavin will appear with his gun drawn. He informs Connor that he’s “been dreaming of this since the first second I saw you”. Connor will tell him not to shoot and that he knows the location of Deviants. Gavin will ignore Connor's request and will try to shoot Connor regardless, and this will then prompt a fight between them. Gavin will be knocked unconscious. FBI Agent Richard Perkins and two police officers will see him on the floor and Perkins will tell an officer to sound the alarm that someone has been tampering with his evidence.

If Connor loses the fight, Gavin will shoot Connor with a final “fucking androids”.

The first and last appearances are determinant

Gavin wears a brown leather jacket with a hoodie and a grey long sleeved shirt with blue jeans.

Gavin typically wears his DPD badge on his left hip. He is seen to wear his handcuffs and gun holster behind him to his right.

Gavin has a scar that goes diagonally across his nose from right to left. (Seen in the character gallery)

"Ambitious and unapologetically arrogant. He has garnered the hatred of his colleagues in record time. Ruthlessly ambitious, Reed will do anything to advance his career, even if it means treading on other peoples’ toes. His hostility to Lieutenant Anderson is common knowledge."[1]

Reed has a noted dislike for androids and openly displays hatred towards Connor, calling him names such as "plastic detective" or "plastic prick". He believes that androids do not have feelings and that androids should obey humans without question. In addition, he probably feels threatened by Connor's presence, due to androids replacing people in jobs, subtly concerned that it is only a matter of time until androids start replacing him.

Gavin threatening Connor with his gun if the player tries to intervene three times during the interrogation.

Gavin acting rude to Connor when he gives him coffee.

Gavin punches Connor if the player informs that Connor always listens to Hank's orders in Waiting for Hank.

Gavin at the Eden Club.

Gavin taunts Connor with his gun in Last Chance, Connor.

In one of the choices, Gavin is about to kill Connor in Last Chance, Connor.

Gavin Reed knocked out by Connor in Last Chance, Connor. 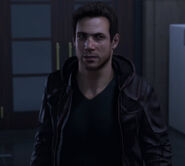 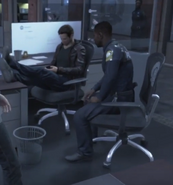 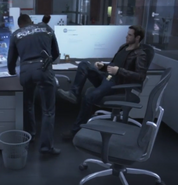 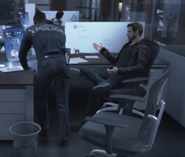 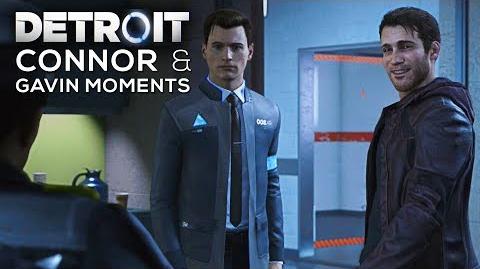