"The Pirates' Cove" to "Battle for Detroit

Jerry is a group mind of EM400 model androids in Detroit: Become Human. They worked an amusement park called Pirates' Cove before it was abandoned.

The emergence of the EM400 model android quickly led to the replacement of all human employees in amusement parks. Their relentless good mood, inability to 'tire out' and versatile nature made them the perfect fit for positions that required the Jerrys to be in constant contact with children. In the amusement park Kara, Luther and Alice discover, the Pirate's Cove attraction is completely staffed by 'Jerry' EM400 androids.

It is implied things went on as usual here until a large portion of the Jerry EM400 androids became deviant. There are many possible reasons this could have happened, such as prolonged contact with the children (who are very emotional beings by nature) that once filled the park, the closing of the park or a traumatic emotional experience such as being abandoned by humans. Regardless of how this occurred, it is obvious the park has been abandoned for some time.

The Jerry androids meet Kara, Alice, and Luther when they seek shelter in Pirates' Cove.

The trio meets their first Jerry searching the park, who greets them before shutting down due to a malfunction. Later, a group of over twenty Jerry androids break into their shelter to see who is there, as they have had problems with hostile humans. Once discovering the trio aren't a threat, the androids reassure them that their intentions are harmless and are overjoyed at the sight of Alice, as they have not seen any children since the park was closed. The Jerrys; attuned to children's emotions, notice Alice's sadness, and invite her to follow them so they can show her something fun. The group is led to a still working carousel, which Kara switches on and helps Alice onto. The Jerry androids then watch Alice as she rides the carousel, delighted by the sight of a happy child.

Multiple Jerry androids can be seen sheltering in the church after the attack on Jericho.

As Kara and Alice make their way to the bus terminal, they can come across one or two (if Luther died in a previous chapter, or if Jericho wasn't attacked in Crossroads) Jerry androids being held at gunpoint by a soldier. Kara can choose to save them or to leave them. If Kara chooses to save them, she knocks the soldier out from behind with a brick and the Jerrys thank her before escaping. If she leaves them, they are executed by the soldier. But, if Luther is still alive, he and Jerry will be held at gunpoint which Kara can choose to save them or leave them to die. If she chooses to save them, Luther will be happy to see her, and Jerry will thank her for saving them. He will tell Kara and Luther to run before the soldiers catch them.

The Jerry that Kara saves makes his way to the Canada Border Inspection Station, where she can potentially sacrifice him. The Jerry offers to sacrifice himself for Alice and Kara and if she accepts his offer, Jerry runs through the line and is gunned down by U.S. Army Border Patrol. This distracts the border guard so that he forgets the thermal scan and welcomes Kara, Alice, and, if still alive, Luther to Canada.

Alternatively, if Kara is captured by soldiers she can encounter a Jerry who tells her how the army came for the Jerrys at Pirates’ Cove and they were all separated. Kara asks him if he has seen Alice and he checks through his connection to the other Jerrys and confirms they have. As Kara goes to search for another Jerry, he tells her that if he can help in any way, she just needs to ask. Nearby is the other Jerry Kara can talk to, and he will tell her to stay put before returning with Alice.

When Kara, Alice, and potentially Luther are lined up for recycling one of the Jerrys is in line with them. When he is spoken to, he offers to attract the guards' attention so that Kara and Alice can be reunited. If Kara used Ralph (if he didn't get killed by the drone) instead of the Jerry to distract guards, he can be used to draw their attention away and allow for the trio or duo to escape. Either way, if Kara accepts his offer he will walk towards the guards who yell for him to get back in line and then shoot as he refuses to move.

Jerry androids appear as an adult white male with red hair and green eyes. They have a soft jawline and when seen without their skin appear to have extra padding compared to other android models, which is likely due to them being built as child entertainers and thus needing to be approachable.

Aside from being designed initially to serve in amusement parks and around children, the Jerry androids seem to all speak and act as if they were one combined being, forming somewhat of a collective consciousness. While still using phrases like 'we'/'us' often and having the ability to take on their own autonomy, their actions and behavior is seemingly tied to each of the androids collectively, with either all of them acting together as one unit or none of them acting at all. They can be seen keeping to this format several points, namely when they all confront the group together in an attempt to see if they were a threat. The only instance of them not acting together is when the lone Jerry you can save (only one if Jericho was attacked, but Luther is alive) is encountered by Kara at the Canadian Border.

Jerry androids are relentlessly cheery and upbeat, showing nothing but kindness to others. They are very empathetic and willingly sacrifice themselves if needed. This is especially true if children are involved due to the Jerrys paternal nature branching from their original programming. It can be seen in both the camp and at the Canadian border when Alice is endangered.

A group of Jerrys at Pirates' Cove.

A Jerry smiles as he watches Alice on the carousel.

A Jerry thanks Kara for saving him. 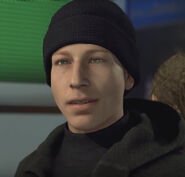 A Jerry at the U.S./Canadian Border.