"Jericho" to "Battle for Detroit"

Josh is the tritagonist of Markus's story in in Detroit: Become Human. He is a PJ500 android. He serves as one of the leaders of Jericho that Markus meets, along with North and Simon.

Josh is a PJ500 android that was working as a university lecturer. He was violently attacked by drunken students, narrowly managing to escape.

Afterwards he escaped and managed to flee to Jericho.

Josh first appears in chapter "Jericho". Markus will encounter Josh and the others inside Jericho.

Josh and the others will introduce themselves to Markus and Markus can talk to them. Later, Josh is seen watching a male android child who is on the verge of shutting down. Josh tells Markus that they are scarce on biocomponents and that they salvage parts from others, who have shutdown. Josh will express his concerns when Markus suggests that they should go to the CyberLife Warehouse and Docks to steal parts, blue blood, and biocomponents. When Simon and North agree to help Markus, Josh will reluctantly agree to help.

Josh and the others enter the CyberLife Warehouse and Docks and will search for parts. When they locate the spare parts, he will assist in stealing. They soon get caught by an android security guard named John, who tell them that they trespassing and that he will notify security. A human security guard named Mike will be looking for John and approaches the group. If Markus kills Mike, Josh will dislike the action and his relationship will decrease tremendously. If John becomes deviant and asks the group to take him back to Jericho, Josh suggests for it, stating that it would be unfair to leave John after he took a risk for them. If Markus agrees to take John along, he will tell them that they can get more biocomponents from stealing a truck. Josh suggests against this, stating that it is too risky and if they get killed, their people will get nothing.

He meets up with the crew and enters the broadcast floor in the Stratford Tower, where they have to deal with the security on the floor. Josh objects to any lethal force. If Markus decides to assault the guards instead of using a ruse on them, he will dislike the action. When they enter the broadcast room, the group points their guns at the human Channel 16 broadcast employees and orders them to get on the floor. However, a Channel 16 employee will make a run for it. Josh will urge Markus not to shoot, while North tells Markus to shoot the employee to prevent him from sounding the alarm. Josh will hate it if the player decides to shoot the employee. Josh stands in front of Markus at the control desk and broadcasts Markus' speech. If security is alerted, a police SWAT team will arrive and Simon will be injured. Josh will dislike it if Simon is left to die. If Markus saves Simon, they all run to the rooftop.

If Simon is in injured (either by security or SWAT) he will not able to make the parachute jump. Josh will worry about leaving Simon and North will suggest killing Simon. Josh does not like the idea of killing one of their own kind. If the player decides to kill Simon, Josh will dislike the action, but will like it if he spares Simon.

If Markus ruses the guards and kills the employee, the SWAT will not come and shoot Simon. Josh and the other will easily escape.

At Jericho, Josh, North, and possibly Simon will discuss what they should do next. Josh and North argue due to their different viewpoints until they are interrupted by Simon or Markus. Markus then tells them about his idea to free all the androids in Cyberlife stores across Detroit.

Josh will participate in the march. He will try to convince Markus to stand their ground when the rally is ordered to disperse by the SWAT. If he does, Josh's relationship with Markus will increase, but North's and Simon's will decrease. If Markus chooses to attack the SWAT, Josh will plead one last time to not choose confrontation, but he will still attack with the rest of the androids if Markus is determined to charge. There is no chance of Josh being killed in this chapter.

Josh can be seen at the beginning of Markus' part in the chapter, arguing over their resources running low and expressing regret over the revolution. If Markus chose to send a violent message, shot the police men, or fought the police in Freedom March, Josh berates him for doing either one of them and tells Markus that he reaps what he sow. If Markus was peaceful, Josh will still criticize the revolution by remarking that so many have died as a result. Markus can respond aggressively towards Josh's criticism if BITTER is selected and cause his relationship to go down, or Josh will like it when Markus express his REGRETS. Markus will then have to choose their next approach. Josh's relationship with Markus will go up if he chooses STAY HIDING or DIALOGUE, but will go down if he chooses CONFRONTATION. If dialogue is chosen, he will implore Markus to find the right words, as the humans need to know how much they are hurting them. If confrontation is chosen, Josh protests this and warns Markus that he can’t buy freedom with blood.

If Markus is unpopular, when North exiles Markus, Josh will voice that he sides with North.

Later when the US army attacks Jericho, Markus will come across Josh being attacked by a soldier, and can choose to save or leave him. If Markus saves Josh, he will be grateful and his relationship will Increase tremendously. Josh will be executed if Markus does not intervene or fails to save him. If Markus was killed in "Freedom March", Connor will instead find Josh too late and holds him as he shuts down. Josh will jump with the rest of the group if he was saved. Alternatively, if Markus is dead prior to finding Josh and Connor remained a machine, machine Connor will find Josh mortally wounded and observe him as he dies.

If both Markus and Josh survived the events of Crossroads, Markus will have the option to speak to Josh. He will express his gratitude to Markus for saving his life. Josh states that regardless of what Markus chooses to do, Josh will be with him. If North died in Crossroads, Markus will confide about losing her, Josh will reassure him to not let her death be in vain. Starting a revolution instead of a demonstration will still negatively affect Josh and Markus' relationship.

Alternatively, if Markus was killed in Crossroads and North and Josh jumped, he can be seen watching North's speech about her revolution.

If Markus chooses to attack the camps, Josh will be killed no matter what. He will charge alongside Markus and be almost immediately shot by the soldiers when he leaves the barricade. If Markus pulls him behind cover, he will grab his arm and tell him that the blood they spill is on their hands, before shutting down.

If Markus chooses to peacefully protest, Josh is seen at the front lines alongside Markus. When Markus is reinforcing the barricade, he will call for help and Josh (alongside Simon (determinant)) will assist him in moving a car. After, Josh will empathize with Markus and tell him he knows they're making the right decision before reentering the barricade. If Markus checks the soldiers positions and Connor became devaint, Josh will question him on whether he thinks Connor will make it.

Later, when the army decides to put an end to the demonstration, Markus can either KISS NORTH (if the player has reached 'Lover' status with North), SING, SACRIFICE or DIRTY BOMB (If Markus accepted the detonator in "Crossroads"). If Markus chooses to sing or kiss North with high public opinion, the US army will stand down and Josh along with all the other androids are spared. If Connor succeeded in liberating the androids from the Cyberlife tower, then Josh can be seen standing behind Markus while he makes his speech. If the player chooses those two options with low public opinion or sacrifice, Josh will be shot along with all the other androids. If the player chooses to detonate the dirty bomb, then Josh can be seen in the crowd of androids.

If Markus chose to perform a REVOLUTION in Night of the Soul, Josh will always die during the android raid toward the camps, even if he is saved after being wounded.

If Markus chose to perform a peaceful DEMONSTRATION in Night of the Soul and Markus chooses to sacrifice himself by setting himself on fire, or Public Opinion is too low, Josh will be gunned down along with the rest of the androids that were held at gunpoint.

Josh is typically calm and composed, and is convinced of the possibility of a peaceful solution with the humans. He often has disagreements with North on how to approach humans, which is a source of tension in Jericho's leadership group throughout the game.

He is reluctant to take risks, as shown when he only decides to help Markus steal spare parts when North and Simon volunteer as well, and chastising Markus if he makes choices with higher risk. Curiously, he's sympathetic to John and will vote to take him to Jericho if he becomes a deviant because "he took a risk for [them]".

Unlike North, who feels violence is the only way to approach humans, or Simon, who is prepared to take more risks to try and liberate androids, Josh is a pacifist at heart. He will only use guns to threaten humans, not kill them, and throughout the game voices his belief that revealing themselves will only put them in danger. As a result, he takes longer to earn Markus' trust and will treat him with some level of contempt even if he sticks to peaceful decisions, up until Night of the Soul.

Early on, Josh is ultimately willing to reveal Jericho's presence to humanity, especially during Freedom March, to the point where he is willing to die to try and earn their freedom. However, he starts to show signs of doubt later on once the manhunt for their people begins and androids start being taken to recycling camps. In the end, he will accept the consequences of Markus' decisions (whether he's alive or dead) and resolve to do what he can to see the revolution through its final days. 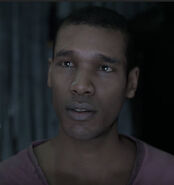 Josh helps hijack the broadcast in the Stratford Tower.

Josh and crew in Freedom March.

One of Josh's possible deaths in Battle for Detroit.