Leo Manfred is a human in Detroit: Become Human. He is the son of famous painter Carl Manfred, who he has a strained relationship with.

He is the main antagonist in Markus' second and third chapter.

Leo was born March 21, 2010, the result of a short but passionate affair between painter Carl Manfred and a fan. Leo was raised by his mother; Carl recognized paternity and paid a generous child support, but did not see Leo again until he was a teenager, aged 16 (2026).[1]

At some point, Leo became addicted to Red Ice.[1]

Due to his father's wealth, he was always asking for money, partially to support his drug addiction. He had a hard time accepting Markus, feeling as if Carl treated him much better than his own son.

Leo arrives at the house and walks into the art studio. He is high on drugs. He looks at Markus rudely and asks his father to give him some money. His father recalls giving him money already. Leo has already wasted away the money on drugs and his father refuses to give him more. This makes Leo angry and he starts to complain about his father taking care of Markus rather than him. He pushes Markus before claiming that his father never loved anybody, and angrily leaves.[2]

Later that night he breaks into his father's house to steal some paintings, justifying it as a down payment on his inheritance. His father will ask Markus to ask him to leave. Leo instantly becomes angry once again and decides to beat up Markus. As Carl pleads Markus not to move, Leo tries to provoke Markus as he attacks him. Markus, realizing it‘s not fair, breaks his programming and turns deviant. Leo will then grab him and will rant about destroying Markus. However, If Markus follows Carl's order to not defend himself, Leo will shove him and his father will die of a heart attack and when the police officers arrive he accuses Markus of killing his father, resulting in Markus being shot.[3]

If Markus defends himself by pushing Leo, he will fall backward, hit his head, and will immediately be knocked unconscious. Carl will feel upset that his son was injured and driven by the fear of harm coming to Markus, he tells Markus to run away before the officers arrive, but will still lead to the officers shooting Markus.

Later on, it is revealed in a magazine that Leo regains consciousness and gives the statement that Markus attacked him.

If Carl is dead, Leo goes to visit his father's grave, where he encounters Markus. After looking at each other, Markus passes by Leo and leaves the graveyard, without speaking a word as Leo stares in shock.

If Carl is alive, Leo will leave a video voice mail at the house saying that he is sorry about what happened last time. He will tell his father that he is getting out of the hospital tomorrow from his injuries and the hospital staff informed him that Carl stayed with him while he was asleep. He will tell his father that he will quit drugs and he will admit that drugs messed him up. In addition, Leo states that it turned him into somebody he hates and asks his father if he can come over tomorrow if it is okay with him. In the end of the message Leo will say he is proud to be Carl's son.

Leo is the complete opposite of his father, being rude, foul-mouthed, and short-tempered. He believes that his father loves his android, Markus, more than him, and as a result he antagonizes Markus frequently. Leo also has a drug problem, which makes him act out violently, to the point of attacking Markus after being simply told by his father to leave. However, he appears to dislike this aspect of himself, even saying that it "turns [him] into somebody [he] hates." If Markus opens the message from Leo in Night of the Soul, he appears much more subdued and unsure of himself, though it's unclear whether this is what he's usually like while sober or whether he's still recovering from being hospitalized.

Despite their strained relationship, Leo still loves his father and visits his grave if he died in Broken, indicating that he may feel remorseful about what happened. Furthermore, he makes time to contact Carl if he's still alive in Night of the Soul, even admitting that he's going to make another effort to quit Red Ice. Since it's implied he's been through rehab at least once and considering that this is his last appearance in-game, it's ambiguous whether or not he quit his habit for good.

Leo hurt and unconscious, if Markus defended himself in Broken 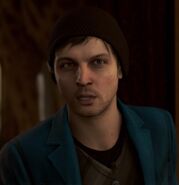