"Time to Decide" to "Crossroads"

Lucy is a KL900 android in Detroit: Become Human.

Lucy is a KL900 android that worked in social care. She was assaulted and heavily damaged by a psychotic patient, severely damaging her skull in the process. She was discarded as dead but managed to rally and save herself.[1]

Remembering an android that had told her about Jericho once, she found her way there. She has since been caring for the androids of Jericho to the best of her abilities.[1]

While occupied with her new duties, Lucy realised that her psychological simulation module allowed her to predict future events, like glimpses into the future.[1]

She will treat Markus' injuries and make cryptic predictions about his future.

If Luther died in "Midnight Train", Lucy replaces him in talking to Kara about Alice being a YK500 android. Like Luther, she encourages Kara to accept their roles as family members.[2]

If Jericho is raided, she is found by Markus, or deviant Connor if Markus is dead/gone. She appears badly wounded and collapses, presumably dying after being left behind.

Lucy's skull is severely damaged, with the entire back missing; her head's internal parts hang out and down her back. Her human skin is slightly malfunctioning, deactivating in a cloud-like manner, constantly moving patches and revealing the android skin underneath, all around her face and down to her neck. Lucy's eyes are completely black. The skin below her eyes has black, irregular curved lines extending slightly downward. Lucy's voice is also slightly different from human, with a consistent machine tone that matches her word pitch whenever she speaks. 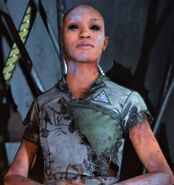