"Zlatko" to "Battle for Detroit"

Luther is a TR400 android in Detroit: Become Human. He is owned by Zlatko and is his servant. He is the secondary antagonist of the chapter "Zlatko", becomes the the tritagonist of Kara's story from then on.

Luther is an TR400 model android, designed as a strong laborer. Luther doesn't remember much about his time before coming to his current owner Zlatko Andronikov.

Like other androids that were unlucky enough to find themselves in Zlatko's workshop, Luther was programed to serve as a personal assistant, security and 'muscle' for Zlatko's operation, obeying and serving him ruthlessly.

In 2038, he meets Kara and Alice, an android and a little girl lured in by Zlatko. If Kara doesn’t break free from Zlatko's reprogramming, Luther will continue to serve Zlatko along with Kara.

If Kara manages to break free before the reprogramming is complete or remembers Alice in time, he can betray Zlatko and save Kara and Alice from being killed after a change of heart caused by seeing Kara fight to protect and rescue Alice.

He disobeys Zlatko and embarks on the life of a deviant, choosing to spend his newfound freedom protecting his friends on their journey.

Commandeering Zlatko's car, the trio make their way through a snowstorm before the car breaks down. Requiring shelter for Alice due to the blistering cold, they come upon an abandoned amusement park called Pirates' Cove, where they take up residence in a boarded-up store, which Luther assists in gaining entry. After Kara tucks in Alice and tells her a bedtime story, she has a talk with Luther, who asks if she has noticed anything about Alice.

Suddenly, the store is stormed by a horde of Jerrys. If Kara chooses to protect Alice, Luther goes for the gun in their bag. To their relief, the Jerrys are not hostile, merely curious about their new visitors and checking to make sure it is not humans that will harm the Jerrys. Upon seeing Alice, the Jerrys are excited to see their first little girl to entertain in a long time and thus invite her to a ride on the carousel. As Alice rides around the carousel, Kara is surprised to see her smile. Luther comments on how Alice hadn't had much to smile about before meeting the Jerrys.

Luther, Kara, Alice arrive at Rose's Farm, a place Luther heard about from some of Zlatko's androids. They are here to see Rose, a human woman who has been helping deviant androids escape Detroit to Canada. After Kara talks to Rose and the group settles in the house, Rose leaves the house for a bit. A police officer arrives at the house to ask if there are any androids in the house and insists on entering the house. Luther can be caught if the pantry curtain is open and the officer will decide to look and when Luther approaches him, the officer will shoot him. In another choice, if the officer checks the other room where other deviants are hiding, Luther will attack the cop and die in the process. If Kara is able to hide everything, answer the cops questions, and intervene when Adam has difficulties with answering the cop, the officer will leave. Rose then comes back and tells everyone that they need to go.

Luther, if not killed in Midnight Train accompanies Kara, Alice, and Rose to Jericho. Upon arriving, attempts to tell Kara something about Alice, but it's to no avail as Kara states that it's better left for the bus and then leaves to find Jericho's leader, so he stays with Alice as they wait for her return.

As Alice is revealed to be an android due to an identical YK500 android being spotted by Kara, Luther asks if she still loves Alice, and to remember that Kara and she had found solace in each other. If Kara is distant, Alice will split away with her and join Luther.

Just after this, if Connor managed to locate Jericho, the trio try to escape quickly as it is raided by the FBI and the U.S Army. As they're escaping, Luther is shot and wishes for Kara to save herself and Alice. If she refuses to comply, and she's successful at helping him, she'll hide him in a cabin, and he assures them he'll meet them at the border, and he is left behind. If Kara is unsuccessful, the three get captured.

As Alice and Kara exit the boat, if Kara chooses to run and fails to act, Luther will kill the guards for Alice and Kara. However, he is shot and dies quickly after he had gotten injured, but not before thanking Alice for making him a part of a family with Kara.

During the Battle for Detroit, Luther can either be captured by the army (If Saved in Crossroads) or dead, depending on your choices. He may have the following outcomes:

Luther dying will remove relevant choices in future sections of the chapter and later chapter(s). He plays a major role in protecting Kara and Alice from being killed, but Luther protecting them or being a distraction as in-game choice usually results in his death.

If the police officer discovers deviants in Rose's farm, Luther will sacrifice himself to protect Kara, Alice, and the other androids.[1]

Kara and Alice can play dead when escaping from U.S. Army but if Kara attempts to defend Alice when the soldiers examine them, Luther will rush in and knock out the soldiers. He will be shot in the process and dies soon after.[2]

Luther is shot by a soldier during the escape and urges Kara to ditch him. If Kara ditches him, he is not seen again, however, his death is not confirmed. Possibly causes of his death are bleeding of Thirium 310, further shots from soldiers (not shown in-game) and being drowned along with Jericho.

When Kara sneaks through Detroit to reach the bus terminal. She may spot Luther and Jerry being held at gunpoint on the way. If she hurries to the station, Luther and Jerry will be executed by a soldier.

Luther can be asked to act as a distraction so Kara can move over to reach Alice, he will then be shot.

If Todd Williams is alive, he will catch Kara and confront them, calling some soldiers to alert them that they are androids as revenge for leaving with his "daughter". If Kara does not persuade Todd to let go of them by appealing about his past, Todd will reveal the trio are androids. If Todd is dead, the checkpoint guards can question the androids if they reach them. Luther will then die distracting the soldiers while Kara and Alice escape.

If Luther is asked by Kara as a sacrifice so she can pass the border to Canada with Alice, Luther will accept the request, pull out his gun and pretend to threaten Kara by killing Alice. He will be surrounded by soldiers and shot, and Alice apparently saved. Alternatively, if Kara chooses to sacrifice no one but Markus (or North) is leading a violent revolution, Border Guard 2677 will alert the soldiers to secure the trio, shooting and killing all of them.

If Luther goes to Canada by boat, when spotted by coastguards, Kara can decide how to elude them, but all choices lead to Luther's death. Most choices lead to Luther protecting Alice and Kara, with the exception of Surrender - The trio are all killed, or Plunge (Dive) - The trio succeed to prevent being shot, but Luther reveals he is near his end when he climbs back onto the boat.

Luther is a black android with brown eyes and short curly black hair. Luther is one of the biggest and strongest androids in the story, towering over every android and human he meets and is capable of fantastic physical feats that far outdo the average strength of an android. He also has fast reflexes and can take away Zlatko's shotgun in surprise. However, he may show inadequate dexterity on several occasions, including being unable to catch Kara when she escapes from Zlatko's pursuit.

Luther's usual attire is a gray shirt, matching cargo pants, a simple matching wristband on his right arm, and black shoes. After joining Kara and Alice, he wears a long gray hooded jacket and matching finger-less gloves. His LED is also removed to help him blend in with humans.

Before becoming deviant, Luther is obedient, although he shows remorse when Alice is taken away from Kara. However, he can become very mentally unstable when witnessing a child protecting his or her parent. After becoming deviant, Luther remains quiet but shows care and understanding to both Kara and Alice. He accepts his mistakes, tries to focus on the future whenever possible, and tries to encourage the duo. He would also sacrifice himself to ensure the survival of the latter and he states he is willing to do so. Alternatively, he will take the job of protecting Alice should Kara choose to sacrifice herself. He often takes advice from Kara and rarely objects to her decisions.

Although Luther is less seen in parenting, he puts effort into being a gentle father to Alice, and encourages Kara into accepting the true nature of Alice, telling her that does not deter what the duo desires. Luther shows exceptional care for Alice, calling her as the most special person that he has met in the world.[3]

Although unmentioned, Luther very likely removes his LED after Zlatko's death to blend into outdoor environment, since American Androids Act disallows androids not to wear standard uniform, also Luther has become a deviant and he chooses never to wear a uniform again. Luther has removed his LED if he reaches security checkpoint, as this is essential to fool the patrolling police and U.S. Army. 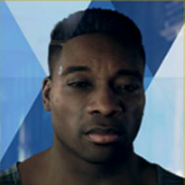 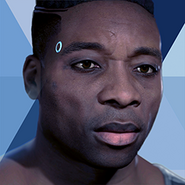 Alice, Kara, and Luther at the bus terminal in Battle for Detroit.

Alice, Kara, and Luther attempt to cross the river in Battle for Detroit. 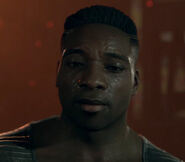 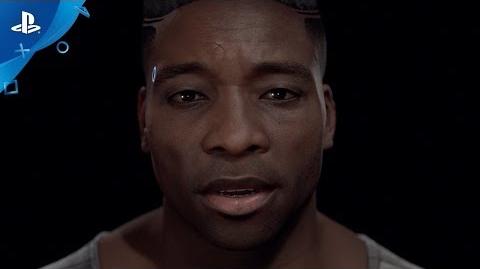