For others of the same last name, see Wilson (disambiguation).

M. Wilson is a human in Detroit: Become Human. He is a police officer that works for the Detroit City Police Department.

In "The Hostage", Wilson is one of the officers that responded to the hostage situation. He is shot in the right arm by Daniel and is bleeding out on the terrace. He will plead for help when he sees Connor. Connor can check on Wilson. Connor will tell Daniel that Wilson needs medical attention and that he is going to apply a tourniquet to his wound. Daniel will fire a warning shot and tell Connor not to touch Wilson or he will kill him. Connor has the choice to obey or ignore Daniel. If Connor ignores Daniel, he will use his tie as a tourniquet for Wilson. If Connor obeys Daniel, he will leave M. Wilson to die.

If M. Wilson was saved during The Hostage, he will appear in "Public Enemy". He will notice Connor walking by in the broadcast room in Stratford Tower and decides to get Connor’s attention. He tells Connor that he is grateful that he saved his life during hostage situation.

If Connor is killed in other parts of the story, his replacement will forget about the hostage situation and the replacement Connor will say "Sorry, you must be mistaken." This disappoints Wilson that the original one that saved him has been destroyed and explains the event to Connor's replacement.

If Connor interrogates the JB300 and finds the deviant android, Wilson can be killed by JB300 336 445 581 when the JB300 escapes down the hallway and steals a rifle from a SWAT officer. 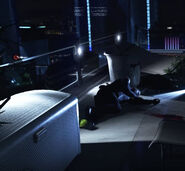 M. Wilson on the ground wounded in "The Hostage"

M. Wilson shot in the arm 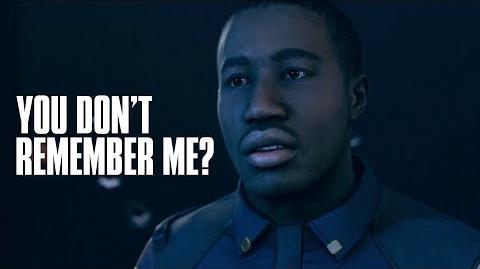 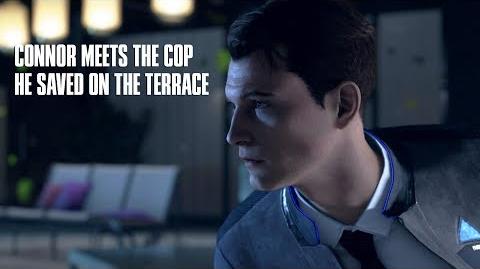 Retrieved from "https://detroit-become-human.fandom.com/wiki/M._Wilson?oldid=37497"
Community content is available under CC-BY-SA unless otherwise noted.