The (male) PC200 and (female) PM700 are two android models created by CyberLife.

They are designed as law enforcement and police auxiliaries, and are used for minor and basic duties like patrolling, guarding and observation tasks. They are unarmed, and may not use force.[1]

The known appearances for the models are of a dark-haired white man and a black woman. 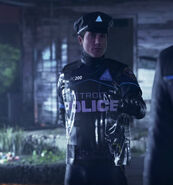 PC200 with a raincoat on guard duty in Partners. 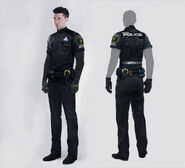 Concept art, android cop.
Add a photo to this gallery

Retrieved from "https://detroit-become-human.fandom.com/wiki/PC200_and_PM700?oldid=32692"
Community content is available under CC-BY-SA unless otherwise noted.