The PL600 is an android model created by CyberLife.

The PL600 is a CyberLife android model that was released in 2034. Its function was as a domestic assistant and household worker. The PL600 was quickly superseded by newer and better models, such as the AP700. Due to this, it is in a period of irreversible market decline. [1]

The known appearance of the PL600 is an adult white male, with pale blue eyes and blond hair. 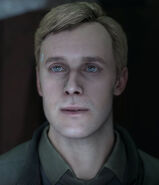 A pre-owned PL600 in Android Zone.
Add a photo to this gallery

Retrieved from "https://detroit-become-human.fandom.com/wiki/PL600?oldid=36170"
Community content is available under CC-BY-SA unless otherwise noted.