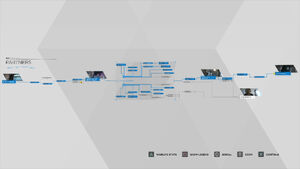 Partners is the sixth chapter of Detroit: Become Human. This chapter has two different outcomes.

Connor was sent by CyberLife to find Lieutenant Hank Anderson and accompany him in the investigation of the murder of Carlos Ortiz, committed by a deviant. He finds the lieutenant at Jimmy's Bar and has to convince him to drive to the location of the homicide. At the crime scene, Connor needs to investigate the scene to find clues about the homicide and possibly find the deviant who committed the murder.

This is the flowchart walkthrough for Partners, with 100% completion rate and all checkpoints. This chapter is from the perspective of Connor. To the right is a picture showing the in-game flowchart, while below is a text version for ease of use.