Past the Tipping Point

Unprecedented hurricanes all across Mid-West

PAST THE TIPPING POINT

Environmentalists have long warned us about a 'tipping point' - the moment at which global warming reaches a level that is irreversible. Scientists are now saying we have officially passed it.

Global rainforests have been reduced by 79% since 2000, and coastal corals by 58%. Polar ice has melted to such an extent that rising sea levels have many states struggling to keep water out of their coastal towns. With these 'cooling factors' so diminished, there is now too much carbon in the atmosphere for the environment to ever absorb.

Jason Reese, head of the Global Environment Agency, said: "this study confirms what many of us have suspected for a long time - but the real calamity is the linked decline of natural resources, from energies to minerals, which are almost exhausted and can never be replaced".

Many environmentalists have criticized Reese's comments as discouraging people from taking action. But Reese has defied these criticisms: "It's important people accept the reality of the situation. The planet will keep getting hotter now. The only question is, how fast?" 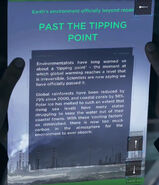 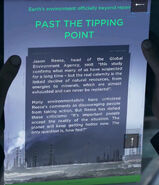 This magazine is located in the The Nest chapter, after Hank Anderson kicks in the door. Once inside, the magazine is on a table near the door, prior to entering the room with the birds.

Retrieved from "https://detroit-become-human.fandom.com/wiki/Past_the_Tipping_Point?oldid=29255"
Community content is available under CC-BY-SA unless otherwise noted.