For speculation, please use the rA9/Theories subpage and comments section.

rA9 is a word repeatedly used by deviant androids.

"rA9" (or its all-caps spelling "RA9") consistently appears around deviant androids. They speak the word, hold it important, and write it down, over and over, in many places.

Despite many characters offering input, the exact nature and origin of "rA9" is never conclusively solved or explained.

Androids have spoken and acted in the manner of holding "rA9" as a spiritual belief, higher power, or savior figure. They call on its name in times of distress, expecting some form of saving, even beyond death. They may make offerings, such as a statuette; the repeated writing of rA9 might also be some form of dedication.[1][2][3] Some androids insist on their autonomy by emphasizing they are "alive" along with mentioning rA9.

rA9 is reported by multiple deviant androids to be the first android to "Wake up" and become deviant, and that it would return and free the others of its kind.[4][3]

Other androids mention rA9 unintentionally without being aware of any meaning or reason for it, such as Ralph.

Elijah Kamski, creator of first androids, claims that he does not know who rA9 is or if they even exist, he refers to rA9 as the origin, the first android to awaken, a strange phenomenon, like a spontaneous religion. Kamski suggests that androids have a common desire akin to humans to believe in something bigger than themselves, even if it is irrational.[3]

RA9 written by Rupert on his apartment walls. 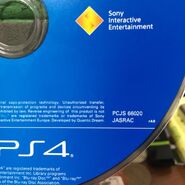 Retrieved from "https://detroit-become-human.fandom.com/wiki/RA9?oldid=38814"
Community content is available under CC-BY-SA unless otherwise noted.