"Fugitives" to "Battle for Detroit"

Ralph is a WR600 android in Detroit: Become Human.

Ralph was a gardener, one of five thousand WR600s bought by Detroit during the 2030s to maintain its parks.

Ralph was attacked by a group of human delinquents who tortured him for fun before he managed to flee. He was reported missing by his owners.

Ralph lives and hides in an abandoned squat in the Camden suburb on the outskirts of Detroit, having developed a fear and hatred of humans.

When Kara and Alice go to the abandoned house, Kara attempts to find a way inside the home. Ralph is seen holding a knife and threatening Alice, so Kara tries to convince him that they will not harm him. She can either successfully convince him, or use the gun taken in Stormy Night to threaten Ralph. He will change his mind, apologize for his behavior and offer to let them stay in the house. If the player decides to go inside, Alice will feel uncomfortable around him and he will be seen carving rA9 on the walls with a knife. If Kara asks what it means, he replies "I don't know." This is one of the only times he refers to himself in the first person.[1]

After Kara goes upstairs and changes her appearance, she can find the body of a man in the bathtub with his throat slit. However, Ralph attempts to play house with Kara and Alice, having caught a large rodent as "food" for Alice, and he will insist that she eat it like the humans do as an apology for his behavior last night. When Ralph starts to get agitated when Alice does not eat it, Kara can either threaten him with her gun or a knife on the table, confront him about the corpse in his bathtub, or try to talk him down.

Kara has the option to threaten him with the gun taken from Stormy Night or if she sits down and doesn't have the gun (either she didn't take it in Stormy Night or she forgot to pick up and left it upstairs) she can then threaten Ralph with a knife on the table. Before tension can rise, they're interrupted by the arrival of Connor. Kara and Alice will slip through the back before Connor enters the house.

If confronted about the body or talked down, Ralph will apologize and say he wanted to be their friend. When Connor approaches, Ralph will hide the girls under the stairs to protect them.

He is found by Connor when he later enters the abandoned house. Connor can scan Ralph and find information on his model, job, and scar. Connor can interrogate him about Kara's location and Ralph will deny knowing anything if Kara did not threaten him. If Connor finds them, Ralph will grab Connor and tell Kara and Alice to run.

If Connor does not find them, Hank Anderson will order Connor to leave and Kara will thank Ralph while Ralph tells Kara to protect Alice no matter what. If Kara threatened Ralph, he will freak out saying he only wanted to help them. When Connor asks Ralph where they went, Ralph will tell him they ran out through the back door. [2] From here, Ralph will disappear from the story entirely and not reappear again in Battle for Detroit - Kara Captured

Ralph is among those sent to Recall Center Nº5 if Kara ran into him in Fugitives, Kara didn't threaten him and Connor found Kara and Alice. Kara can talk to him and he will panic, attracting the attention of a drone. Kara can ask him about Alice, try to calm him down, or stop talking to him. If Kara instantly asks him about Alice, he will panic more loudly and be killed by the drone. If Kara "gives up", she will leave Ralph in a panicked state, but alive. If Kara does calm him down, he will say that he hasn't seen Alice. Ralph will then stop talking and sit down by the fence.

If still alive, Ralph will reappear in a line beside Kara repeatedly saying he doesn't want to die.

If he and Kara parted on good terms in 'On the Run', he will offer to help Kara and Alice escape the Recall Center. If asked by Kara to help, he will wish them well before he will sacrifice himself to distract the U.S. Army soldiers, enabling her to escape. If Kara does not ask for his help and Kara is overpowered by a soldier trying to escape, Ralph will tackle the soldier before he can shoot Kara and yell for her to run. The soldier manages to regain the upper hand and shoots Ralph. [3]

Ralph's fate is left unknown. It is uncertain whether Ralph survives if Markus liberates the Recall Center, or if he is never sent to the recall center, he disappears, possibly remaining in hiding.

One of Ralph's most prominent features is the scarring on the left side of his face. In addition to a large number of smaller scars, he also has two larger, open gashes where the damage appears too great for his skin to regenerate. His left eye is also affected as it appears black and mechanical with a dark blue iris and sclera.

When Connor scans him, he sees that the damage was caused by burning, probably deliberate.

Ralph habitually refers to himself in the third person. Although he is distrusting of humans and androids due to his past trauma, he also seems to have a desire to be a part of a family as he refers to Kara, Alice, and himself as "Father, Mother, Little girl" while cooking an animal.

He has an energetic personality and his mood can rapidly fluctuate between extremes, for example, going from fearful to giddy in seconds. He also has trouble controlling his anger, having seemingly killed a human in rage at one point. If captured and brought to the recall center he will say he is responsible for multiple human killings. 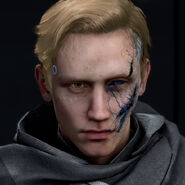 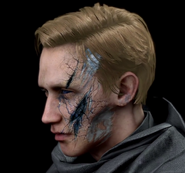 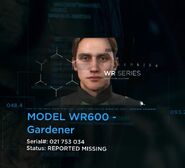 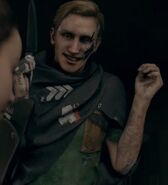 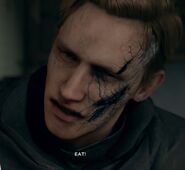 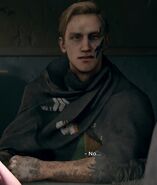 Ralph with his skin deactivated. 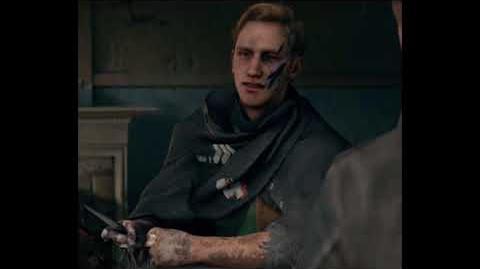