The synthetic stimulant informally known as "red ice' has become the drug of choice for Detroit's growing underclass. Analysts have pointed to Detroit's status as the epicenter of android production, suggesting the drug flourishes in the dissatisfaction caused by androids taking human jobs.

Sociologist Dr Julian Carter has drawn the same link with androids: "As CyberLife's androids spread across the country, they will bring red ice with them. Poor men and women, desperate to make ends meet, become users - or even dealers."

Not only is the popularity of this drug spreading rapidly, but its chemical composition is uniquely dangerous. Thirium, the main ingredient in android 'blue blood', is among the active agents in red ice and has a highly destabilizing effect on hormone production. The National Association for Narcotic Prevention (NANP) say the problem is going to get worse: "the purity of ingredients is very low and deteriorating".

America's biggest narcotics industry is only likely to grow. Red ice dealers are reported to have an unofficial motto: "Where the blood is blue, the ice is red... and the money is green". 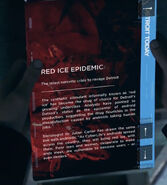 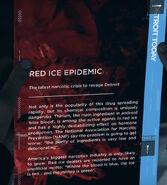 This magazine is located in the The Nest chapter, after Hank Anderson kicks in the door. Once inside, the magazine is on a table near the door, prior to entering the room with the birds.

Retrieved from "https://detroit-become-human.fandom.com/wiki/Red_Ice_Epidemic?oldid=32979"
Community content is available under CC-BY-SA unless otherwise noted.