"Midnight Train" to "Battle for Detroit"

Rose Chapman is a human and a major character in Detroit: Become Human. She lives with her son Adam Chapman on her Farm outside Detroit. She secretly sympathizes with deviant androids and helps smuggle them across the border to Canada.

In 2037 (one year before the game), the first android arrived at Rose's Farm. Rose hid him for a while, but he wanted to cross the border to Canada; he was shot dead in the attempt.[2] Rose then began purposefully helping deviants, hiding them and helping them escape further and to Canada.

Kara and company arrive at Rose's house, asking for help. She decides to help Kara, Alice, and Luther, who desperately want to cross the border. Her son, Adam is worried that the police will arrest Rose and himself, for all of this business with deviant androids. Rose invites the group into her house, where she finds out that Alice is running a cold. She tells Kara that they can stay in one of her free rooms upstairs while she makes Alice some food and finds her some medication.

Later, Kara finds out that Rose is hiding other androids at her house. Kara talks with Rose about crossing the border and Rose tells her that it will be very hard to cross the border with the android revolution going on, but Kara insists, and Rose leaves to find some help. While she is gone, the house is visited by a police officer looking for androids and it is up to Kara to hide all the evidence. After the police officer leaves, Rose returns and informs the group that they will leave that night.

Rose drives Kara, Alice and Luther (depending if Luther was sacrificed in Midnight Train) to Jericho. She tells the group that they will find help there and leaves.

If Kara makes it to the bus terminal with Alice and Luther (depending if Luther was sacrificed in Midnight Train or Crossroads) and returns the lost tickets, Adam spots them and guides them towards Rose and her car. She tells them that she has found a smuggler that will help them cross the border, over the river. As they reach the river, Rose pays the smuggler for the boats and says goodbye to Kara, Alice and/or Luther. She and Adam head for their car as the androids prepare to make the crossing.

If Kara takes the lost tickets from a family, boards the bus and makes it to the border, she sees Rose in line at the Canada Border Inspection Station. The outcomes for this ending can vary, see more at Battle for Detroit:

Rose is seen wearing a warm, light blue vest, a checkered, light pink and blue shirt and a blue, long sleeve shirt underneath. She also wears a charm around her neck.

Rose lives with her son Adam on a small farm in the suburbs of Detroit. When her husband died suddenly of cancer, Rose had no choice but to fend for her son and herself, continuing to operate the small family farm to meet their meager needs.

Rose also helps deviants seeking to cross the border, seeing them as slaves fleeing oppression who must be protected at all costs.[1] 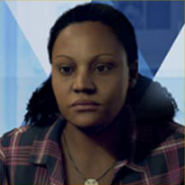 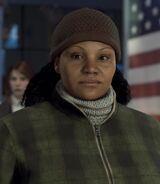