View source
watch 02:23
Wiki Targeted (Games)
Do you like this video?
Play Sound

Rupert is a WB200 android in Detroit: Become Human.

With stolen money[2] he acquired a forged driver's license with the name Rupert Travis[1]. He also acquired human clothes.

Rupert moved into an abandoned apartment near Urban Farms. It was full of pigeons, which he used to feed. On the walls, Rupert drew labyrinths and wrote "rA9", 2471 times by Connor's count. He kept a notebook filled with encrypted text and labyrinth drawings, which he hid in a wall behind an Urban Farms poster.[1]

A neighbor called the police claiming to have heard noises from the abandoned apartment and seen a man hiding a LED under his cap. When Hank Anderson and Connor arrive to check on a possible deviant case and knock on his door announcing their presence and police affiliation, Rupert runs and hides in the apartment's ceiling. Connor can examine the room to find Rupert's fake ID and Rupert's Diary hidden in a cracked part of the wall under the Urban Farms poster. Connor can recreate events to find Rupert.

When Connor finds him, he will run and Connor will chase him through Urban Farms of Detroit. He will then get cornered by Hank but manages to push him off the building. If Connor continues to chase Rupert instead of rescuing Hank, he will run out of places to run. He will criticize Connor by saying that he is a traitor to his own kind and a slave to the humans. Hank will arrive and slap Connor for leaving him and cuffs Rupert. Before they can leave, Rupert says "RA9 Save me" and jumps off the building, ultimately destroying himself.[1] On the other hand, if Connor decides to help Hank onto the roof again, Rupert can escape and arrive at Jericho[3].

If Rupert committed suicide, he later appears in Last Chance, Connor, in the Detroit Police Department Central Station evidence room, but is very badly damaged and unable to talk after jumping off a rooftop of Urban Farms of Detroit building. Connor can probe his memory for the encryption key and read his diary for information, which leads to Connor finding Jericho. [4]

If Rupert escaped, he will be seen inside Jericho in a tent watching over several badly damaged androids as they are being repaired by other androids. [3]

If Rupert did not die in "The Nest" and Jericho was attacked in "Crossroads", he will appear inside the church behind Simon.[5]

Rupert wears a baseball cap and a grey military jacket with patches on it. He has a bullet wound on the upper right side of his chest. 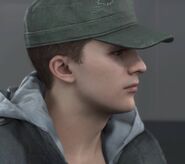 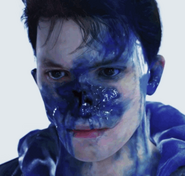 A close up on Rupert's appearance in the evidence room. 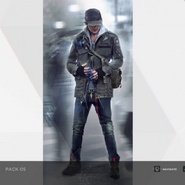 Rupert inside Jericho in Crossroads.

Rupert's badge on the side of his jacket.

Rupert's fake ID found by Connor in The Nest