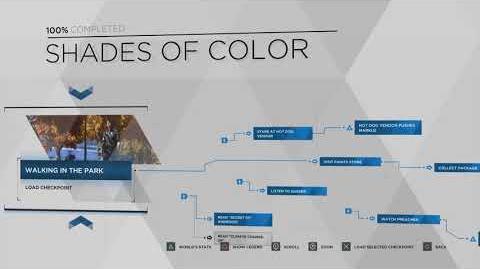 Shades of Color is the third chapter of Detroit: Become Human. This chapter has only one outcome.

Markus is running an errand to pick up some paint, but encounters hatred toward androids the entire way.

This is the flowchart walkthrough for Shades of Color, with 100% completion rate and all checkpoints. This chapter is from the perspective of Markus. To the right is a video showing the in-game flowchart, while below is a text version.

At the start of the chapter, Markus will head through Henry Ford Commemorative Park and there will be a bench. The player can check the bench on your right to read the magazines, Secrets of Androids and Climate Change-Up. Afterwards, head out of the park and cross the street until you see a hot dog vendor in front of you. Stand in front of the vendor's cart until he pushes you out of the way.

Next, head to your left, and you should see a busker standing in front of the fountain. Approach the busker, and press L1 to watch him play. Afterwards, turn around and walk towards the entrance to the shopping arcade. Before entering you will see a preacher to the right-hand side of the entrance. Approach the preacher and press L1 to listen to his sermon, until he yells at you.

Now head into the arcade, and enter the Bellini Paints store on the left-hand side. Approach the android shopkeeper, and press the displayed buttons to complete the transaction. After this, pick up the paints, and exit the store.

After leaving the store, head back the way you came from, and towards the bus stop. On the way, you will encounter a group of protesters and it's leader. Approach them to trigger a cutscene in which they attack you. Once the police officer has intervened, carry on towards the bus stop and enter the bus to complete the chapter.