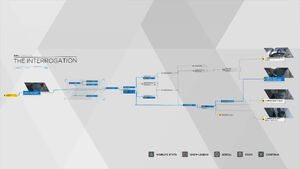 The Interrogation is the ninth chapter of Detroit: Become Human. This chapter has four different outcomes.

This chapter is from the perspective of Connor. For this chapter to be available, the player must have located the deviant in Partners. The fate of the android prisoner affects later chapters.

This is the flowchart walkthrough for The Interrogation, with 100% completion rate and all checkpoints. To the right is an image showing the in-game flowchart, while below is a text version for ease of use.

The android’s stress begins at 35% and is affected by every choice you make during the interrogation. The optimal range is between 50-70%[1]

After two choices, you’ll get a different set of options:

Then Connor can press the subject further:

After two choices, or immediately after threatening to probe its memory, the android will ask if it is going to be destroyed:

The android asks why Connor didn’t let it go:

Then you get to choose an approach to continue the interrogation (Twice):

Convince it: You'll get 3 sets of 3 different options. If the Stress is within the Optimal Level, the Android will confess. If it's stress is too low or too high, the convince will fail.

Then you will get: