Thirium 310, commonly called "Blue Blood", is a major component of CyberLife androids in Detroit: Become Human. It is a deep dark blue fluid that circulates energy and electrical information throughout the android's body and biocomponents. Its main ingredient is Thirium.

Thirium 310 was invented by Elijah Kamski and was one of the features that made possible the modern, very human-like androids developed by CyberLife. It is synthesised out of Thirium and other substances supposedly mined in the arctic.

The Thirium 310 is circulated in the android's body by a thirium pump "heart" akin to blood in a human circulatory system; the pump is regulated by another biocomponent, the Thirium pump regulator. The fluid then carries energy and information to the biocomponents, its synthetic organs.

The Thirium 310 is vital for androids to function, akin to human blood. The loss of blue blood or the failure to circulate it will impair an android's functions and biocomponents, up to causing a shutdown.[1]

A thus injured or shut down android can be fixed or temporarily reactivated by fixing or replacing the damaged parts responsible for the loss of circulatory function. If the leakage of Thirium 310 persists despite the provisional repairs, then the android will deteriorate further until it shuts down, to a level that disallows further reactivation attempts of the same sort.[2]

One possible way of replenishing blue blood for androids is to ingest it orally.[3]

Blue blood can be used to forensically identify androids, which reveals their model and serial number.[4]

When exposed to air for a few hours Thirium 310 evaporates and becomes invisible to the naked eye, but leaves a residue that can be detected with the proper equipment, such as by police androids equipped for forensics (e.g., RK800).[4] 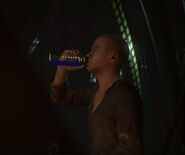 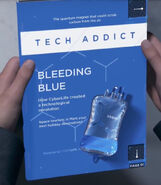 Article discussing Thirium 310
Add a photo to this gallery

Retrieved from "https://detroit-become-human.fandom.com/wiki/Thirium_310?oldid=32359"
Community content is available under CC-BY-SA unless otherwise noted.