"The Opening" to "Battle for Detroit"

Todd Williams is one of the two secondary antagonists (alongside Gavin Reed) of Detroit: Become Human. Serving as the main antagonist of Kara's story, and a minor antagonist of Connor's story.

He is the father of Alice and the owner of Kara, who he assigns to look after his home daughter.

Todd was a former taxi driver who lost his job when self-driving cars became popular in 2021. He then became a laborer, then a bouncer and security guard, only for androids to replace human labor in each of these fields too. For several years he had been working odd jobs, including dealing Red Ice, a powerful stimulant, as part of a small drug trade around the neighborhood to pay for his own addiction. He was arrested several times for drug trafficking and also for violent misdemeanors.

Todd had a wife and a daughter. Unhappy with his behavior and addictions, his wife left and took their daughter with her. Todd claims she entered into a relationship with an accountant.

After his wife left with their daughter, Todd acquired a YK500 android that he called Alice to replace her. He also at some point purchased an AX400 domestic android "Kara" to look after the house and Alice. They live in a modest suburban home on 4203 Harrison Street Corktown, Detroit.

Dwelling on his memories and his hatred for androids, who he blames for his sad predicament, Todd is abusive towards both Alice and Kara. He destroyed Kara multiple times before the start of the game, who was repaired and sent back reset with a memory wipe.

He is first seen in the chapter, A New Home, where he collects Kara after having her repaired at the Android Zone store. He then takes her home and orders her to clean the house. He then watches ice hockey and takes some red ice. If Kara chooses to do the laundry and finds a bag of Red Ice on the shelf, Todd catches her and warns her not to touch his drugs.[1]

At dinner, he throws a fit and accuses Alice of blaming him for his wife leaving. Todd orders Kara to stay still after Alice flees upstairs. The story that can go multiple ways with different endings for Todd:

If spared, he will head to DPD Central Station to file a police report about Kara attacking him. If Kara fought and stunned him, he will be seen with a bandage over his forehead. He will be seen leaving the station or at a desk talking to Officer Person. Connor can not interact with him, due to not being relevant to Connor's story.[3]

If dead, a police report in the computer will note his death, discovered by a friend, and the disappeared AX400.[3]

If alive, he will be seen on television in the Eastern Motel being interviewed by Joss Douglas, who is reporting for Channel 16 news about what happened that night. He claims that Kara assaulted him for no reason. He mentions nothing about Alice missing.[4]

If he was killed Joss Douglas will report that Todd was murdered by a AX400 and police are conducting a search for the android. Watching the news report will lead to a small decrease in public opinion on androids.

If he is not killed in Stormy Night, Todd can be seen in Battle for Detroit if Kara, Alice, and optionally Luther make it to the bus depot. He grabs Kara and calls for security, claiming that she stole his little girl. However, if you saw his family photo from Alice's box and understood the chain of events (his wife took their daughter away when she left and he bought an android to replace her), the additional option is unlocked in the second dialogue choice; he can be reasoned with and call off the guard. He breaks down, admits his faults and wishes Kara and Alice good luck. If not stopped by Kara, Alice hugs Todd and forgives him before they leave.

If you act hostile, fail to convince or don't use the unlocked dialogue he will tell the U.S. Army soldiers that they are androids, but Luther will save you if he is with you. If Luther is not there, Kara and Alice will be executed by the soldiers.[5]

If Kara decides to take the handgun out of Todd's room, he will be shot in the chest by Kara during the conflict. If the player fails the QTE to grab the gun, Alice will instead grab the gun and shoot Todd in the back.

Todd is a white middle-aged man who has brown hair that reaches to his neck with blue eyes, a stocky build, and tall at 6 ft.

In The Opening, Todd is seen to be wearing a dark olive jacket. The regular out is a maroon top with a dark green cardigan over it, dark denim jeans with black shoes.

As seen in "Stormy Night", Todd is shown to be extremely hot-headed and short-tempered and would resort to violence whenever it is "needed" (due to his wife leaving him with his daughter and his addiction to Red Ice), as shown when he threatens Kara that he will "bust her worse than last time" if she moves, and intends to inflict physical harm towards Alice with his belt. As a Red Ice addict, he is prone to frequently inhale Red Ice for comfort. He also shows obsessiveness and hostility on whoever gets in his way.

Todd is highly emotionally unstable and tends to have extreme flashes of rage over the smallest perceived slights. He loses control frequently, contributing to multiple destructions of Kara before the story begins and possible destruction of Alice and Kara for the last time. Todd tends to believe that he can tell what other people are thinking just by looking at them. He shows signs of having a persecution complex and believes that his misfortunes in life are caused by people intentionally screwing him over. For example, he believes that his wife left him for an accountant without a word, when in fact she had told Todd at least once before their divorce that his anger was scary and that he needs to stop abusing drugs. Todd constantly deflects blame to others for his own mistakes and shameful feelings. However, he appears to be able to regain some composure if Kara reasons with him while he is not under effects of Red Ice.

Todd's extreme mood swings can result in him going from mercilessly beating his daughter in a blind-rage, to then sobbing on her shoulder and repeating to himself that loves her just seconds later. During these episodes, Todd will end up confessing about his faults multiple times, however, these episodes appear to be transitory and do not appear to affect his likelihood of entering another blind rage later on.

Todd had also developed a habit of lying to protect his citizenship and mental health, as shown in lying to a salesperson about Kara's apparent destruction and treating Alice as his real daughter. Todd is possibly combating depression and has been taking an antidepressant called Zolpidem Tartrate (seen on the bottle label), the warnings on this medicine read "Contains Tianeptine" and "Risk of behavioral disorders."

In spite of this, Todd is a weak-willed, miserable, self-loathing and insecure man who lost most, if not all of his self-esteem and confidence from his poor upbringing and has devolved into a spiteful misanthrope selfishly willing to harm others and his own health for no apparent reason beyond a lack of self-control. He also fails to make attempts to improve himself or doesn’t bother to do it at all, ironically making himself sink much lower than what he used to be. If reasoned with by Kara if she meets him again, Todd seemingly had a change of heart, showing regret over driving his family away and acting unpleasant to Alice while he wanted to have his family back to prove that he could be a good father. Although Todd knows his family won't come back to him, he wishes Kara, Alice, and Luther good luck on their journey to Canada.

Todd orders Kara not to move.

Todd, having been wounded while fighting Kara.

Todd on tv, if alive in On the Run.

Todd at the DPD Central station. 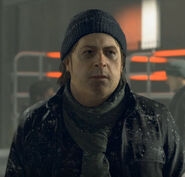 Todd's appearance in Battle for Detroit.

A picture of Todd with his wife and daughter.

Todd's police report if he was killed.