Tom Morton is an actor and director with dual French and British nationality. He is completely bilingual and also works extensively as a translator and voice artist. He portrays Floyd Mills in Detroit: Become Human.

Tom Morton was born in London and educated at the French Lycee there. He studied History and Languages at the University of Edinburgh where he also got involved in the Bedlam Theatre. On completing his degree he moved to Paris and attended the Cours Florent for two years. His first feature role was in 2006, playing opposite Michele Laroque and Jacques Gamblin in Isabelle Mergault's follow up to the award-winning Je Vous Trouve Tres Beau, Enfin Veuve. He has lent his voice to numerous international advertising campaigns, as well as multiple documentaries and computer games. In addition to his acting career, he is a stand up comedian and has performed in Paris, London, Edinburgh and LA. 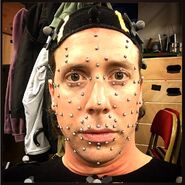