U.S. Army is organization that appears in Detroit: Become Human.

In 2038, the U.S. Army is called in to suppress the Android Rebellion in Detroit by President Cristina Warren.

A human combat unit of the U.S. Army.

In 2031, the U.S. government orders 2 million androids for use in the infantry, with a view to reducing human casualties, with android soldiers. These androids are ordered to perform subordinate tasks and would not be allowed to carry a weapon, in accordance with the American Androids Act.[1]

Beginning in 2032, the U.S. Army, like most of world’s military, has replaced a rising number of humans with androids. More than 80% of combat units were quickly comprised of SQ800 androids.

The objective was to be able to replace human soldiers with machines, so as to limit human losses in the event of conflict. Androids also have the advantage of never becoming tired nor hungry, being well disciplined and not experiencing fear, providing a decisive advantage in combat.

As the deviant revolution reached its climax, the army immediately neutralized all of its android soldiers to avoid any risk of rebellion. All the remaining combat units at the time of the revolution are therefore exclusively human, weakening the country’s defense severely in a context of imminent world war.[2]

In Crossroads, they assist FBI Agent Richard Perkins in raiding Jericho and are ordered to exterminate the deviants inside. If Markus/Connor manages to blow up Jericho, the soldiers were ordered to evacuate, failing the mission. If Markus/Connor were killed before they can blow up Jericho or Markus died before Crossroads/was banned from Jericho and Connor remained a machine, the soldiers manage to capture most of Jericho, possibly sending them to recycling camps or killing them.

In Battle for Detroit, the U.S. Army enforces the curfew placed on Detroit. They have orders to shoot or capture all androids, captured androids are sent to recall centers. They are seen patrolling city areas, bus terminals, and security at the Canada Border Inspection Station.

US Army Soldier in Gallery

Concept art of a military android by Pierre Bertin. 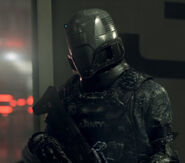 Retrieved from "https://detroit-become-human.fandom.com/wiki/U.S._Army?oldid=33493"
Community content is available under CC-BY-SA unless otherwise noted.