The Android Polar Bear is a URS12 android in Detroit: Become Human. It is owned by Zlatko and is locked in a cage in his mansion. This article describes the animal android that appears in Zlatko chapter, not the type URS12.

The bear is a URS12 model that resembles the appearance and behavior of a polar bear. It was bought secondhand by Zlatko Andronikov as part of his "experiments".

Like other machines unlucky enough to find themselves in Zlatko's workshop, the bear is modified by him such that it is shown to have dismembered skin, exposed electric wires and possibly a damaged left eye.

In 2038, Kara may come across the bear when hiding from Zlatko and Luther, or between the time of her (failed) reset and searching for Alice. The bear shows hostility to her by roaring but does not actually attack her if she unlocks the cage.

If the cage is unlocked and Kara is spotted afterwards, the bear protects Kara and Alice by distracting Zlatko, who shoots it twice with a shotgun, resulting in it shutting down. If cage remains locked, the bear remains in the cage. The bear's aftermath is not revealed if left in the cage. If Kara sets fire after unlocking the cage, the bear may survive after being shot, and escape to a nearby forest when Zlatko is killed.

The bear has a bulky appearance that resembles a polar bear, its skin is a partly torn apart synthetic exoskin (intended to grant animal appearance) that covers its inner metallic body, exposing its back along with synthetic spine, and some connected wires stick out of some of its back. A thick cable can be see connected to its stomach and extending to an unknown location behind it. Unlike human androids the exoskin is not generated by illusion, but composed of material. Its left eye glows like electrical light while right eye looks natural as a bear's eye, so the left eye is possibly damaged. The bear has no apparent LED shown on its body.

Its actual strength is unknown, and it simulates closely in movement and behavior of a real bear. However, it has an unique trait of not attacking an approaching non-hostile individual, as shown in its encounter with Kara. The bear threatens Zlatko, and attacks him when shot by his shotgun, it is never mentioned if the bear becomes deviant however. 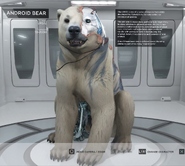 Concept art of the Android Polar bear, by Pierre Bertin.
Add a photo to this gallery

Retrieved from "https://detroit-become-human.fandom.com/wiki/URS12_Android_Polar_bear?oldid=36243"
Community content is available under CC-BY-SA unless otherwise noted.