"The Eden Club" to "Night of the Soul"

She was a WR400 "Traci" android working at the Detroit Eden Club. She has short blue hair and is in love with a fellow identical Traci with brown hair.

On November 6, 2038, she was rented along with another Traci by Michael Graham. Graham was violent and broke the other Traci, making her fear and beg for her life. When Graham did not react, she strangled him to death, unintentionally. She left and hid with her beloved in the club's warehouse.[1]

In Chapter "The Eden Club", Connor and Hank Anderson investigate the case.

If the Tracis died, they are stored in the DPD Central Station Evidence Room.[2] Connor can reactivate her with the required biocomponents from the brown-haired Traci and she will not be able to move much. She will ask about her girlfriend, but Connor will ask her about the location of Jericho. She will refuse to talk with him because he killed them both, and insists on her deactivating her. Connor can trick her by removing her girlfriend's head and pretending to be her by mimicking her voice and making her mouth move. She will be happy to give her lover the location of Jericho. She reaches her arm out and Connor will download the location from her. With his mission accomplish, Connor drops her girlfriend's head. Traci panics and Connor shuts her off.

Alternatively, Connor can reactivate her then using the map of Jericho found in Statuette, find Jericho's location by cross-referencing the map by scanning her memory.

If the Tracis fled, they can be seen together in Jericho on top of the railing as Connor or Kara. Connor can observe them upon entering Jericho, however he will note to himself to avoid them in order to prevent raising suspicion.[3]

If the Tracis were not killed by Connor in "The Eden Club" and Jericho was attacked in "Crossroads", they will both be in an abandoned church behind Simon on the far left.[4] 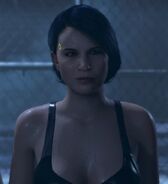 The Tracis in the church (Night of the Soul)