watch 02:34
Wiki Targeted (Games)
Do you like this video?
Play Sound

The YK500 is an android model created by CyberLife in Detroit: Become Human.

The YK500 is a CyberLife android model released in 2033.[1] It is a child android designed to closely simulate a real human child for its "parents", mimicking childlike behaviors and needs. It replicates emotions like affection and love (especially for its parents), joy and sadness, pain, and can simulate cold, fever, and various childhood illnesses.[1] Unlike a real child however, its needs can be selectively deactivated for convenience in its settings.[2][3]

The known appearance of the YK500 is of a 9-year-old female child. Its LED can be deactivated[1] (possibly removed[2]) to perfect the illusion of a real child.

The YK500 was a commercial success immediately on hitting the market and still continuing in 2038. Its popularity is sometimes credited as a factor in the declining human birthrate, e.g. by sociologist Mary Wallace. For proponents, a child android enables customers to enjoy parenthood without the hassle or long-term commitment and costs.[1][2]

See also the galleries of individual androids of the model, such as Alice#Gallery. 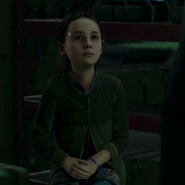 A YK500 seen in Crossroads.

Male child android of unknown model, in Jericho in "Time to Decide"

Alice, a YK500 android who was believed to be Human early on in game
Add a photo to this gallery

Retrieved from "https://detroit-become-human.fandom.com/wiki/YK500?oldid=40571"
Community content is available under CC-BY-SA unless otherwise noted.