This article is about the character. For other meanings, see Zlatko (disambiguation).

Zlatko Andronikov (Russian: Златко Андроников) is a human in Detroit: Become Human, appearing as the main antagonist in the chapter "Zlatko".

He trades in androids, selling them for profit, and experimenting on them. To acquire new material he also lures deviant androids to him under the pretense of giving them aid.

He is the descendant of an aristocratic Russian family that fled their home country at the time of the Russian Revolution in 1917. At his generation, the family fortune was severely depleted and he led a troubled and degenerate life. His legacy was quickly squandered and his family's glorious past was a past to him.[1]

He was in prison for a few years, for embezzlement and fraud.

Zlatko traded in androids, acquiring his raw material by purchasing cheap secondhand androids and tech, as well as by luring deviants to his home with the promise of helping them; when in actuality he reset and resold them. Zlatko also kept some androids to use in experiments; he had a passion for tinkering with androids and reshaping them into monstrous forms.

During November 2038, Zlatko possessed the android Luther as a servant, as well as a number of experimentally mutilated androids such as the Scarred android, Bathtub android, and a URS12 Android Polar bear.

In "Zlatko", Kara and Alice visit him looking for help. He invites them into his home. He then tricks Kara into believing that he can help her and Alice escape to Canada. He tells Kara about needing to remove a tracker on her.

He leads her to the basement where he has a diagnostics/dissembler machine that is used on androids. When Kara steps onto the machine, he reveals his true intentions, saying that deviants are so naive about him helping them out and that he just resets them or uses them for his experiments and that there was no need to remove the tracker, because for some reason, the tracker stops working when an android becomes deviant. He orders Luther to lock up Alice and is surprised that Kara seems to actually care about Alice. He will go to his computer and begin the resetting process.

Kara can be reset or escape from the machine to prevent being reset. If she regains her memory or escapes the reset, she will later find a hiding Alice, who’ve escaped into the last room in the long hall. Finding Alice missing, Zlatko commands Luther to assist him in finding them and takes a shotgun in his mansion, loading it. Zlatko would eventually spot the hiding duo and try to shoot them, but an android bear, if released by Kara, would distract him but be killed by him or damaged if the mansion is set on fire by Kara, buying time for the duo to escape downstairs. Kara and Alice may die from being shot, or they may escape downstairs and eventually make it outside of the mansion through the back door. Alice slips when running, causing the duo to be cornered by Zlatko and Luther. Devastated by the action of Alice trying to protect Kara, Luther breaks free of Zlatko's programming and takes the shotgun out of his hands.

Zlatko is killed by a group of androids that he abused if Kara released them, or is shot by Luther when he tries to kill him with an axe if Kara did not release the androids. Afterwards, his car is stolen by Luther and used to escape.

If Kara was reset and was unable to recover her memories she will become Zlatko's slave and it seems that Zlatko has modified her eyes, causing them to be solid black. She will be seen serving him food while he experiments on androids and he thanks her as he continues his work on one of his creations.

If Kara released all the androids that Zlatko abused for his experiments, they will appear from the background and beat Zlatko to death. However, if Kara did not release the abused androids, then Luther will shoot and kill Zlatko when he tries to kill Luther with his axe.

When Kara and Alice meet Zlatko, he pretended to be helpful and concerned about their safety, suggesting that they should go to Canada as they had no android laws there, only to later reveal his true colors after Kara went into his machine, taunting her about her naivety and the fact that she will never remember Alice or achieve her dreams.

True to himself, Zlatko is a very cruel, selfish, and greedy man with intensive curiosity as he would experiment on androids and later sell their parts for his own personal gain, as shown when he resets the memories of androids to make them his servants, owning Luther and possibly Kara if she didn’t regain her memories in time. Due to the loss of his family fortune during his generation and based on his comments, there is some implication that Zlatko is very bitter and cynical through his views of the dreams people wanted and attempt to reach as he can never reach his own and simply tries to fulfill himself by being the person he is now. He is also very homicidal and somewhat territorial, as he would kill or take away any visitors or trespassers such as Kara and Alice if they either posed a threat to him or are seen useful to his hedonistic goals. Due to his knowledge of androids, Zlatko is very perceptive and intelligent, as he revealed to Kara that the tracker inside an android stops working when they become deviant, seemingly knew that Alice is an android, presumably used one of his androids to lure deviants into his territory, and owned multiple machines to reset and experiment on androids. Because of his actions, the androids tortured by Zlatko see him as the real monster and eventually kill Zlatko if Kara freed them before.

Zlatko was interested in the occult and necromancy, as evidenced by the skulls near the panels depicting Jesus Christ, but abandoned them, since the skulls and panels are covered with cobwebs. 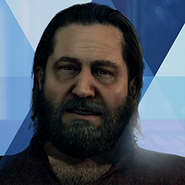 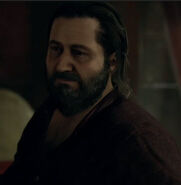 Zlatko threatens Luther to get out of his way, so that he can shoot Kara and Alice.

Zlatko is killed by the victims of his experiments.