The Opening
Zoe is a minor human character in Detroit: Become Human. She appears in "The Opening" and has no spoken lines; her name is stated by her mother.

In "The Opening", Zoe is the first person Kara sees after being reset and she stares at Kara before her mother tells her they are going to leave the Android Zone store.

Her character model reappears at different points of the game, though if and which cases are intended to be the same character and which just a reuse of the model is unknown. 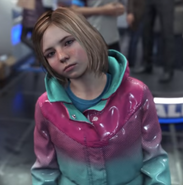 Zoe in the Android Zone store ("The Opening")

Zoe's character model being embraced by an AX400. ("Shades of Color") 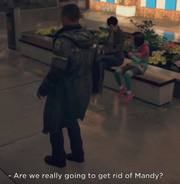